Joni Mitchell net worth: Joni Mitchell is a legendary singer and songwriter who has a net worth of $100 million. Joni Mitchell is widely considered one of the best musicians and songwriters of all time. During her career, Joni sold millions and millions albums. Over the course of her 40-year career, she has released seventeen original albums, won nine Grammy Awards, and has been inducted into the Rock and Roll Hall of Fame as well as the Canadian Music Hall of Fame. She is considered to be one of the most influential and significant female musicians in the latter half of the twentieth century.

Amazingly, she is the sole producer on each of her own albums. Besides being a musician, Mitchell is a painter and has designed all her album covers.

Early Life: Joni Mitchell was born Roberta Joan Anderson on November 7th, 1943 in Fort Macleod, Alberta, Canada. Her mother was of Scottish and Irish ancestry, and she worked as a schoolteacher. Her father's family was Norwegian, and he was a Royal Canadian Air Force lieutenant who worked as a flight instructor at RCAF Station Fort Macleod while she was a young child. After World War II ended, he started working as a grocer and the family moved around the sparsely populated Saskatchewan province for several years. At age nine, she contracted the polio virus and spent several weeks in the hospital, and she began smoking cigarettes at that age. When she was eleven, her family settled in the town of Saskatoon. As a child, Mitchell displayed an interest in playing music, singing, and painting. During her bout with polio, she would perform for other patients in the hospital. She struggled in school but was engaged in her poetry and writing classes. She attended high school at Aden Bowman Collegiate, and after graduating, she enrolled at the Saskatoon Technical Collegiate Institute to study art and painting.

Early Career and Breakthrough: While attending college, Mitchell worked as a singer and performer for The Depression Coffee House, and she sang on local television in addition to radio stations. When she was twenty years old, she decided to pursue folk singing as a career in Ontario, and she left rural Western, Canada for the first time in her life. Once in Ontario, she took jobs performing folk music for small gatherings, clubs, and other less formal venues. In 1964, she became pregnant, and her boyfriend left her. Having no means to support a child, she gave the baby girl up for adoption in 1965.

Folk singer Tom Rush had met Mitchell and been given one of her songs, "Urge for Going," and in the late 1960s, he recorded himself playing it. Other artists heard him performing it, and the song began to catch on in folk circles. In the spring of 1968, she signed on with the record label Reprise and released her debut album "Song to a Seagull." It landed at an unimpressive no. 189 on the Billboard 200 album chart, but it was praised by critics. She released her next album, "Clouds," in 1969, and she won a Grammy for Best Folk Performance the following year. The album performed better than her debut, landing at no. 31 on the Billboard album chart, and her third 1970 album "Ladies of the Canyon" peaked at no. 27 and was later certified platinum. Her next album, "Blue," was a commercial success, and it frequently appears on lists of greatest albums of all time. Following the album's release, Mitchell went on tour, and then produced two more critically acclaimed albums, "For the Roses" and "Court and Spark." For the latter work, she received four Grammy nominations with one win in 1975. During this period, her musical style had shifted away from pure folk and moved towards more experimental, jazz-inspired sounds. She finished the seventies with the albums "The Hissing of Summer Lawns," "Hejira," "Don Juan's Reckless Daughter," and she collaborated with jazz artist Charles Mingus for their 1979 album "Mingus." While her albums in the seventies were commercially and critically successful, her stylistic shift towards jazz confused her fans, and the albums weren't as big of hits as her previous ones. 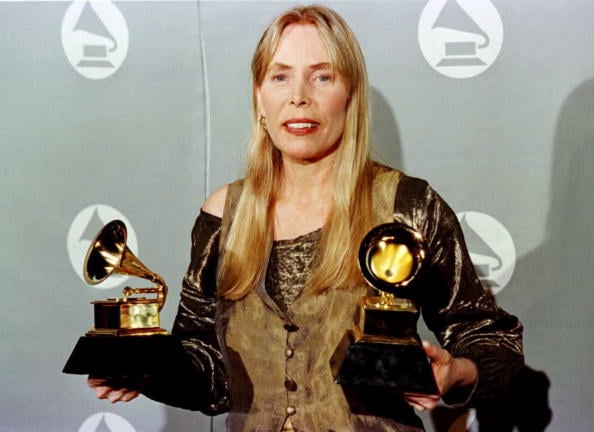 Eighties and Nineties: She returned to her folk and pop roots with her 1982 album "Wild Things Run Fast," which peaked at no. 25 on the Billboard charts, but her 1985 album "Dog Eat Dog" only performed moderately well. She reached larger audiences with her 1994 album "Turbulent Indigo," which won her two Grammy's. The album introduced Mitchell to a younger generation of artists. After agreeing to release a greatest hits album, "Hits," her record label allowed her to release an album of her lesser-known songs called "Misses." In the US, "Hits" charted at no. 161, but it performed much better in the UK, peaking at no. 6 on the charts. In 1998, Mitchell released "Taming the Tiger," which would be her last release of new and original songs. She released "Both Sides Now" in 2000 and "Travelogue" in 2003 to fulfill contractual obligations. Both albums featured reworkings of her older songs. Her subsequent albums would be compilations of previous works.

Personal Life: She was married to fellow folk musician Chuck Mitchell from 1965 to 1967. In 1987, she married bassist and sound engineer Larry Klein, and they divorced twelve years later. She signed a deal with Random House in 1990 to publish her autobiography, and although she previously stated that it would be at least four volumes, she revealed in 2015 that she was recording them orally instead.

She was inducted into the Canadian Music Hall of Fame in 1981, and in 2000, she received a star on Canada's Walk of Fame. In 2002, she was appointed a Companion of the Order of Canada, which is Canada's highest civilian honor. She received a Grammy Lifetime Achievement Award in 2002. In 2015, she suffered a brain aneurysm rupture, which required extensive physical therapy and daily treatments. She has also stated that she has Morgellons syndrome, which is a little-understood condition that causes sores to appear on the skin. Due to her medical issues, she has made fewer public appearances and has focused on her archival releases, which include records from her personal vault. In 2020, she received the Les Paul Award and was the first woman to have been given the honor.

Real Estate: For many years, Joni's primary residence has been a large house in Bel Air, California. If this house hit the market, it would likely be worth $15 – $20 million.

Song Catalog: Thanks to shrewd negotiating skills and the fact that she self-produced every single one of her albums, today Joni owns 100% of her Master Recordings and publishing royalties. When an artist like Counting Crows, Amy Grant or Vanessa Carlton covers a Joni Mitchell song like "Big Yellow Taxi", Joni receives near-majority of the cover's royalties. 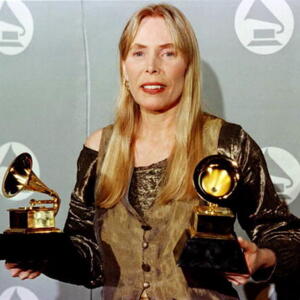