The three Jonas Brothers, Kevin, Joe and Nick, are a wildly successful American Pop Rock Boy Band who have a combined net worth of $150 million. Each brother has an estimated net worth of one-third of that money — $50 million. Nick was the first of the brothers to try his hand at show business. He began acting on Broadway at age 7. His brothers followed in his footsteps and they appeared together for the first time on Disney Channel's Hanna Montana show. Shortly after that appearance, the boys began recording albums. There have been four album releases to date: "It's About Time" … "Jonas Brothers" … "A Little Bit Longer" … and "Lines, Vines and "Trying Times." The group received a Grammy nomination in2008 for "Best New Artist" and won the award for "Breakthrough Artist" at the American Music Awards. Their fourth album, "Lines, Vines and Trying Times" has sold 8 million copies worldwide. The Jonas Brothers first movie, Camp Rock, was released in 2008. They are known to be wholesome role models and are Christian Evangelicals, as well. 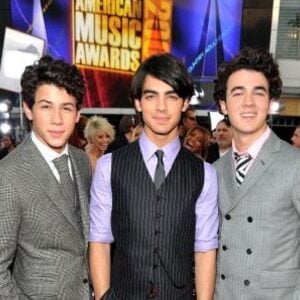