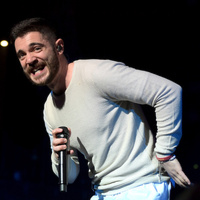 Jon Bellion net worth: Jon Bellion is an American singer, songwriter, producer, and rapper who has a net worth of $4 million. Jon Bellion was born in Lake Grove, New York in December 1990. Bellion released the mixtapes Scattered Thoughts Vol. 1 in 2011, Translations Through Speakers in 2013, The Separation in 2013, and The Definition in 2014. His debut studio album The Human Condition was released in 2016. Bellion wrote the chorus for the song "The Monster" by Eminem featuring Rihanna which won a Grammy Award for Best Rap/Sung Collaboration. He also co-wrote and produced the song "Trumpets" by Jason DeRulo. He has been featured on B.o.B's song "Violence" and the Zedd song "Beautiful Now". Jon Bellion released his second album "Glory Sound Prep" in November 2018. That album reached #15 on the US Billboard chart