John Sebastian Net Worth: John Sebastian is an American singer, songwriter, and musician who has a net worth of $6 million dollars. John Sebastian was born in Greenwich Village, New York in March 1944. He is best known for being the founder of the band The Lovin' Spoonful. John played harmonica on the album The Beast of Billy Faier in 1964.

He also played on albums for Freid Neil and Tom Rush. Sebastian played with the Even Dozen Jug Band and the Mugwumps. The band split and formed The Lovin' Spoonful and The Mamas & the Papas. The Lovin' Spoonful released seven studio albums and their 1966 album Daydream reached #10 on the Billboard 200 chart. Their best known hits include "Do You Believe in Magic", "Jug Band Music", "Summer in the City", "Daydream", "Did You Ever Have to Make Up Your Mind?", "Nashville Cats", "Six O'Clock", "You Didn't Have to Be So Nice", and "Younger Girl". The band was inducted into the Rock and Roll Hall of Fame in 2000 and Sebastian's tie-dyed denim jacket is on display. After he let the band in 1968 he composed the music and lyrics to the Broadway musical Jimmy Shine starring Dustin Hoffman. As a solo artist he released five studio albums and was popular on the rock festival circuits. His 1976 single Welcome Back hit #1 on the Billboard Top Singles chart and was used as the theme song on the sitcom Welcome Back, Kotter. 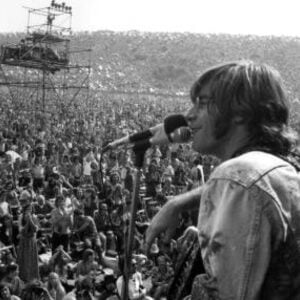