John Prine net worth: John Prine was an American singer, songwriter, and musician who had a net worth of $10 million at the time of his death. He played guitar and his styles included country folk, Americana, and progressive bluegrass. Unfortunately John died on April 7, 2020 from complications due to COVID-19. He was 73 years old.

John Prine was born in Maywood, Illinois in October 1946. He worked as a mailman early in life and actually wrote many of what would later become classics, while delivering mail in the Chicago suburbs. His songwriting skills would eventually earn him admiraiton from the likes of Bob Dylan and Kris Kristofferson. He was drafted into the Army in the late 1960s to serve in Vietnam. He was sent to Germany where he worked as a mechanical engineer. Though he downplayed his role in the war, the experience did inspire what would become his greatest song "Sam Stone", a ballad about a soldier who returns from home mentally shattered and addicted to drugs.

After returning from the war he began performing in the Chicago fold scene. One day he was discovered by Chicago film critic. After hearing a performance, Ebert wrote an article in the paper titled "Mailman Delivers a Powerful Message in a Few Words". Sold out shows followed. One day in 1971, Paul Anka and Kris Kristofferson attended one of Prine's shows. Kris helped John land a $25,000 recording deal with Atlantic Records. Anka signed up to be his manager.

His album In Spite of Ourselves was released in 1999 and reached #21 on the US Country chart. Prine released the album Souvenirs in 200 and Fair & Square in 2005 which reached #2 on the US Indie chart and #55 on the Billboard 200. He released the album Standard Songs For Average People (with Mac Wiseman) in 2007 and his album In Person & On Stage was released in 2010 and reached #1 on the US Folk chart. He also released the albums Singing Mailman Delivers in 2011, For Better, or Worse in 2016, and The Tree of Forgiveness in 2018. John Prine won an AMA Lifetime Achievement Award for Songwriting in 2003 and the AMA Artist of the Year Award in 2005. During his lifetime he was nominated for 11 Grammys, with two wins. He also was awarded the 2020 Lifetime Achievement Award Grammy. 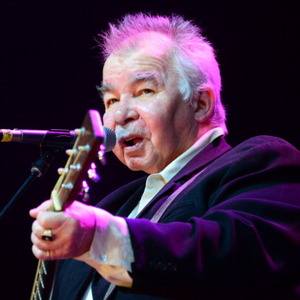