John Hiatt Net Worth: John Hiatt is an American musician and songwriter who has a net worth of $8 million. Born in 1952 in Indianapolis, Indiana, John Hiatt moved to Nashville, Tennessee, when he was 18 years old. He started working as a songwriter and joined the band White Duck, where he was part of the group's second album, "In Season".

Hiatt began pursuing a solo career in the early '70s, releasing his debut single, "We Make Spirit", in 1973. He continued to write music for himself and others, but didn't experience commercial success until the late '80s. His first major hit was "Bring the Family" in 1987, which was the first of nine straight albums to crack the Billboard 200. Hiatt has released around two dozen studio albums as of 2014, including "Slow Turning", "Stolen Moments", "Perfectly Good Guitar", "Crossing Muddy Waters", "The Tiki Bar is Open", "Beneath This Gruff Exterior", "Dirty Jeans and Mudslide Hymns", "Mystic Pinball", and "Terms of My Surrender". Hiatt won the 2000 Nashville Music Award for Songwriter/Artist of the Year and the 2008 Lifetime Achievement Award for Songwriting from the Americana Music Association. He has been nominated for a handful of Grammy Awards and his music has been covered by dozens of popular artists, including Three Dog Night, Bob Dylan, Linda Rondstadt, Bonnie Raitt, Paula Abdul, Willie Nelson, Eric Clapton, Keith Urban, Mandy Moore, and Jimmy Buffett. 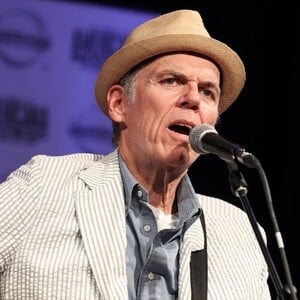