Joe Strummer Net Worth: Joe Strummer was a British musician, singer and songwriter who had a net worth equal to around $4 million dollars at the time of his death, after adjusting for inflation. Strummer was born John Graham Mellor in Ankara, Turkey in August 1952. He was best known as the lead vocalist and rhythm guitarist of the punk rock band The Clash.

The Clash formed in 1976 and were part of the original wave of British punk. Strummer co-founded the band and was their lyricist. The Clash released six studio albums. Their second album Give 'Em Enough Rope hit #2 on the UK charts. Their most popular songs included "I Fought the Law", "London Calling", "Rock the Casbah", and "Should I Stay or Should I Go". The Clash was ranked #28 by Rolling Stone in 2004 their list of 100 greatest artists of all time. They were inducted into the Rock and Roll Hall of Fame in 2003. Strummer was also part of the groups The 101ers, The Mescaleros, The Pogues, and Latino Rockabilly War. He also acted, created film scores, and was a radio host. In 1975 he married a South African citizen so she could obtain British citizenship. In 1995 he married Lucinda Tait. Joe Strummer passed away on December 22, 2002 at age 50 due to an undiagnosed congenital heart defect. His estate worth nearly $1 million pounds was left to his wife Lucinda. 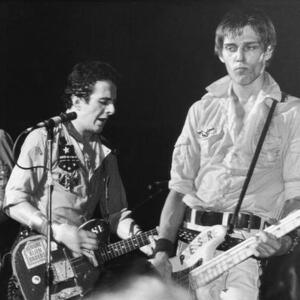