Joe Diffie Net Worth: Joe Diffie is an American country music singer who had a net worth of $10 million dollars at the time of his death in 2020. He was widely regarded for his musical style, which tends to humorous songs with a rock twist and sweet ballads. Tragically, Joe died on March 29, 2020 at the age of 61 due to complications from COVID-19.

Joe Diffie was born in Tulsa, Oklahoma on December 28, 1958. He attended Cameron University in Lawton, Oklahoma before dropping out to pursue a music career. He played in a gospel choir group called Higher Purpose and a bluegrass group called Special Edition. He began working at the Gibson Guitar Corporation around 1986 and shortly after began contacting industry reps about demo tapes.

In 1990 Joe reached Epic Records executive Bob Montgomery, who quickly signed him to a contract. His debut album, A Thousand Winding Roads, was released in 1990. The album's single "Home" soon topped the Billboard Hot Country Songs chart. Several other songs reached high positions on a variety of musical charts.

He was recognized as Male Vocalist of the Year by Cash Box magazine.

Personal Life: Joe Diffie was married four times. Joe was married to Theresa Crump lasted from 2000 to his death until 2017. He married a woman named Tara Tarpening in 2018 and was with her until his death in 2020. He had several children by various partners. 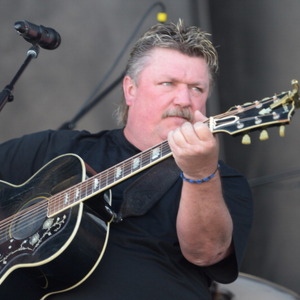