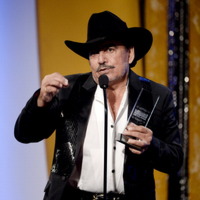 Joan Sebastian Net Worth: Joan Sebastian was a Mexican singer and songwriter who has a net worth of $5 million. José Manuel Figueroa Sr. (Joan Sebastian) was born April 8, 1951 in Julianta, Mexico. He is a multi-Grammy-Award-winning singer and songwriter who has composed hundreds of songs and been a regular staple on the top-40 charts in Mexico since his career began in 1977. His music is a mixture of Latin pop, ranchera and grupera music. His also enjoyed a short acting career when he became the main protagonist of a Mexican soap opera in 1996 when he made his acting debut in the Mexican soap opera Tú y Yo (You and I), sharing credits with Maribel Guardia (his former wife and mother to one of his sons). The soap opera became an instant televised hit. Joan Sebastian has won seven Latin Grammy Awards and four Grammy Awards in his career to date. Joan Sebastian remains one of the most famous singers and songwriters in Mexico. Although he had been diagnosed with bone cancer in 1997, it did not stop him from creating music. His versatility has helped him remain relevant in Mexico's music scene. On July 26, 2012 he announced during one of his concerts that his bone cancer has returned (for the third time). Unfortunately, Joan Sebastian died on July 13, 2015 at the age of 64.