Joan Baez Net Worth: Joan Baez is an American folk singer, songwriter, and musician who has a net worth of $11 million. Known for songs about important topics like civil rights and social justice, Baez has released 25 studio albums, including 1960's "Joan Baez," 1975's "Diamonds & Rust," and 2018's "Whistle Down the Wind." Some of Joan's best-known songs are "Diamonds & Rust," "Joe Hill," and "Sweet Sir Galahad." She helped popularize the songwriting of Bob Dylan in the early '60s, and she recorded several of his songs, such as "Love Is Just a Four-Letter Word," "Blowin' in the Wind," and "Farewell, Angelina." In 2017, Baez was inducted into the Rock and Roll Hall of Fame, and she was inducted into the California Hall of Fame in 2018. She has published the books "Daybreak – An Intimate Journal" (1968) and "And a Voice to Sing With: A Memoir" (1987), and she is also an accomplished painter, showcasing her art in the exhibitions "Mischief Makers" (2017) and "Mischief Makers 2" (2021).

Early Life: Joan Baez was born Joan Chandos Baez on January 9, 1941, in Staten Island, New York. She grew up with mother Joan (aka "Big Joan"), father Albert, and sisters Pauline and Margarita; her mother was born in Scotland, and her father was born in Mexico. Albert's father, Reverend Alberto Baez, left the Catholic Church and became a Methodist minister. Though Albert considered following in his father's footsteps, he went into physics and mathematics instead and invented the x-ray microscope with Paul Kirkpatrick. When Joan was very young, her parents converted to Quakerism, and during her youth, she was the victim of discrimination due to her Mexican heritage. The family moved around because of Albert's work, and they lived in several towns in the U.S. as well as France, Spain, England, Canada, Switzerland, and the Middle East. After Joan graduated from Palo Alto High School in 1958, her father took a job at MIT. The family moved to Boston, Massachusetts, where Baez briefly attended Boston University. Early in her career, Joan became involved with social causes such as non-violence and civil rights.

Career: Baez first learned to play rhythm and blues on the ukulele, and after her aunt took her to a Pete Seeger concert, Joan began learning his songs and performing them in public. She bought an acoustic guitar in 1958 and started performing around Boston and Cambridge. That year Baez performed her first concert for eight audience members at Cambridge's Club 47, and she later became a regular performer at the club, making $25 per show. After folk singer Bob Gibson asked Joan to perform with him at the Newport Folk Festival in 1959, she signed a deal with Vanguard Records and released her self-titled debut studio album in October 1960. The album was certified Gold, as was her 1961 follow-up, "Joan Baez, Vol. 2.," and she then released "Joan Baez/5" (1964), "Farewell, Angelina" (1965), and the Christmas album "Noël" (1966). In 1969, she performed at Woodstock, and in 1971, she left Vanguard for A&M Records. Baez recorded five studio albums for A&M: "Come from the Shadows" (1972), "Where Are You Now, My Son?" (1973), "Gracias a la Vida" (1974), "Gulf Winds" (1976), and the 1975 Gold album "Diamonds & Rust." Her 1971 single "The Night They Drove Old Dixie Down," which appeared on her final album for Vanguard, reached #1 on the "Billboard" Adult Contemporary chart and "#3 on the "Billboard" Hot 100. 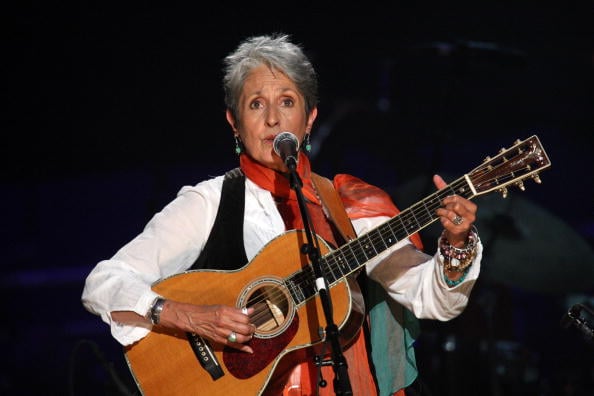 Joan released the albums "Blowin' Away" (1977) and "Honest Lullaby (1979) on CBS Records, and she didn't release another studio album until 1987's "Recently," which she recorded for Gold Castle Records. She performed at Live Aid in 1985, and she took part in Amnesty International's "A Conspiracy of Hope" and "Human Rights Now!" tours. In the early 1990s, Baez signed with Virgin Records and released the album "Play Me Backwards" (1992). After EMI bought Virgin, Joan went to Guardian and recorded 1997's "Gone from Danger." In 2003, Baez released the album "Dark Chords on a Big Guitar" on Koch Records, and she served as a judge for the Independent Music Awards. She performed at the funeral of singer Lou Rawls in 2006, and in 2008, she released the album "Day After Tomorrow" on Proper Records and played at Switzerland's Montreux Jazz Festival. PBS aired the "American Masters" episode "Joan Baez: How Sweet the Sound" in 2009, and in 2010, Joan performed "We Shall Overcome" at the White House. In 2017, she released her first new song in more than 25 years, a track about Donald Trump entitled "Nasty Man." In 2018, Baez released "Whistle Down the Wind," her first studio album in a decade. Joan has retired from active performing, and her final concert took place at Madrid's Teatro Real on July 28, 2019.

Personal Life:  In the late 1950s, Joan dated fellow Boston University student Michael New, who was the inspiration for her 1979 song "Michael." Baez met Bob Dylan in 1961, and the two were in a relationship until 1965. Joan and Bob toured together, and Baez often invited him onstage to sing with her. Her songs "To Bobby," "Diamonds & Rust," and "Winds of the Old Days" are about Dylan. Bob stated of their relationship, "I was just trying to deal with the madness which had become my career and unfortunately she got swept along and I felt very bad about it. I was sorry to see that relationship end."

In 1967, Baez met David Harris at the Santa Rita Jail after Joan, her mother, and dozens of other women were arrested for blocking the entrance of the Armed Forces Induction Center in Oakland, California, in support of men who resisted being drafted into the military. After her release, Baez moved into Harris's draft-resistance commune, and they married on March 26, 1968, just five months after they first met. David was arrested in July 1969 for refusing to be inducted into the military, and Joan gave birth to their son, Gabriel, on December 2nd of that year. Harris spent 15 months in prison, and three months after he was released, the couple separated; their divorce was finalized in 1973. Gabriel grew up to become a drummer, and he has toured with Joan. In the early 1980s, Baez dated Apple co-founder Steve Jobs. She mentioned him in the acknowledgments section of her memoir "And a Voice to Sing With," and after Jobs died in 2011 after a long battle with pancreatic cancer, Joan performed at a memorial that was held at Stanford University.

Activism: Baez was friends with Martin Luther King, Jr., and she took part in many of his demonstrations for the Civil Rights Movement. In 1963, she performed "We Shall Overcome" at the March on Washington for Jobs and Freedom, and the following year, she founded the Institute for the Study of Nonviolence. Joan participated in numerous anti-war rallies and marches during the Vietnam War, and she was a member of a peace delegation that traveled to North Vietnam in 1972; the group ended up being there during the "Christmas bombing," in which the U.S. bombed Hanoi for 11 days. In the late 1970s, Baez established the human rights organization Humanitas International. A supporter of the LGBT community, Joan has performed at the San Francisco Lesbian, Gay, Bisexual and Transgender Pride March and the National Gay and Lesbian Task Force's Fight the Right benefit.

Awards and Nominations: Baez received the Grammy Lifetime Achievement Award in 2007, and she has been nominated for nine Grammys: Best Folk Recording ("Joan Baez In Concert" and "There But For Fortune"), Best Folk Performance ("Any Day Now"), Best Album Notes ("David's Album"), Best Pop Vocal Performance, Female ("The Night They Drove Old Dixie Down"), Best Contemporary Folk Recording ("Asimbonanga"), Best Contemporary Folk Album ("Play Me Backwards"), Best Contemporary Folk/Americana Album ("Day After Tomorrow"), and Best Folk Album ("Whistle Down the Wind"). In 2020, Joan was announced as a Kennedy Center Honor recipient and was elected to an American Academy of Arts and Sciences fellowship. She was also nominated for two NME Awards for World Female Singer, in 1967 and 1971.

In March 2011, Amnesty International honored Baez at its 50th Anniversary Annual General Meeting, an inaugural event for the Amnesty International Joan Baez Award for Outstanding, Inspirational Service in the Global Fight for Human Rights. Joan was the first recipient of the award, and in subsequent years, it was awarded to " an artist – music, film, sculpture, paint or other medium – who has similarly helped advanced human rights." In 2008, Baez's activism earned her a Spirit of Americana/Free Speech award at the Americana Music Honors & Awards, and she has also received the Legal Community Against Violence's Distinguished Leadership Award. 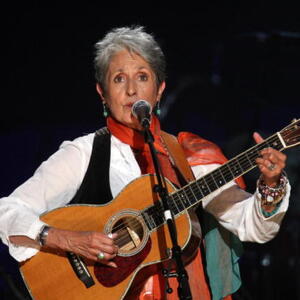