Jim Kerr Net Worth: Jim Kerr is a Scottish musician, singer and songwriter who has a net worth of $45 million. Jim Kerr was born July 9, 1959 in Glasgow, Scotland. He is best known for his work in the band Simple Minds. It has been said that if David Bowie's rich baritone had melded with Bryan Ferry's velvety croon, the result would be Jim Kerr's distinct voice, though that comparison isn't justified if only Kerr's punk beginnings in the late '70s with Johnny and the Self-Abusers were factored in.

Back then, Kerr and his raw combo were an energetic yet dull facsimile of the Damned; Kerr's angry, unpolished vocals weren't distinguishable from the raucous screams of numerous other spiky-haired youths. When Kerr and guitarist Charlie Burchill formed Simple Minds in 1978, along with with Tony Donald (bass), Brian McGee (drums) and Mick McNeil (keyboards), Kerr altered his singing style, smoothing the rough edges while retaining a brooding, enigmatic quality. Panned by some critics as being derivative of Bowie and Ferry, Kerr himself became an inspiration to artists like Icehouse, the Blue Nile and the Mission. In May 1984, Kerr married Chrissie Hynde of the Pretenders; they eventually divorced. In 1985, Simple Minds' Don't You (Forget About Me), recorded for The Breakfast Club soundtrack, ignited the American charts and the band even performed at Live Aid. Kerr also contributed vocals to the Call's Reconciled album. When Simple Minds released the single See the Lights in 1991, many radio listeners, anxiously awaiting a new U2 LP, mistook Kerr's voice for Bono's. But while the band U2 was able to toy with their signature sound to suit contemporary tastes, Simple Minds was dismissed as an '80s artifact. 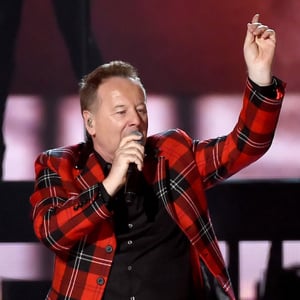