Jessye Norman net worth: Jessye Norman is an American Grammy Award-winning opera singer who has a net worth of $3 million dollars. Born in Augusta, Georgia on September 15, 1945, Jessye Norman is well known for being a soprano and performing to the likes of Wagner. She was inducted into the Georgia Music Hall of Fame and comes from a family of musicians.

She claims inspiration from performers such as Marian Anderson and Leontyne Price. She attended Howard University on a full scholarship after performing at the Marian Anderson Vocal Competition at age sixteen. She became a founding member of Sigma Alpha Iota, the Delta Nu Chapter, in 1965. She graduated in 1967 with a degree in music at the Peabody Conservatory in Baltimore. She received her Master's Degree in 1968. She won the ARD International Music Competition in Munich a year later and debuted at the Deutsche Oper Berlin in Wagner's Tannhauser. Many critics have compared her to Lotte Lehmann. Norman currently lives at a secluded and private estate in Croton-on-Hudson, New York. In the 1990a, she featured at Tchaikovsky's 150th Birthday Gala and debuted at the Lyric Opera House of Chicago. She appeared and performed at the second inauguration of President Bill Clinton in 1997. In 2003, a tuition-free arts school, known as the Jessye Norman School of Arts, was opened in Augusta, Georgia. She recently published her first memoir, Stand Up Straight and Sing!, on May 4, 2014 via Houghton Mifflin Harcourt. She has played over 37 major opera roles and has performed over forty oratorio and orchestral parts throughout her career. She has over 36 honors and awards to her name. 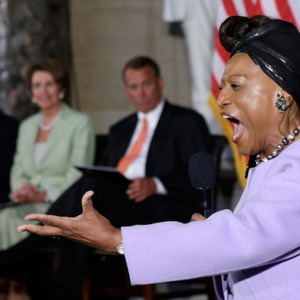