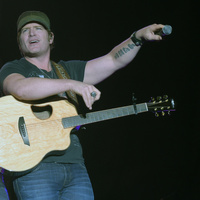 Jerrod Niemann Net Worth: Jerrod Niemann an American country music artist who has a net worth of $5 million. Jerrod Lee Niemann was born in Liberal, Kansas in July 1979. His mother won an autographed guitar by Tracey Lawrence that Jerrod learned to play on. He attended South Plains College in Levelland, Texas. He started singing and playing guitar in clubs and bars in Texas. He released his self-released debut album Long Hard Road in 1999. Niemann released a second self-released album in 2004 titled Jukebox of Hard Knocks. His first major label debut with Sea Gayle/Arista Nashville was Judge Jerrod & the Hung Jury in 2010. The album sold more than 300,000 copies and hit #1 on the US Country chart and #7 on the Billboard 200 chart. His album Free the Music in 2012 hit #9 on the US Country and #62 on the Billboard 200 charts. He released Yellow Brick Road in 2013 and High Noon in 2014, which hit #3 on the US Country and #18 on the Billboard 200 charts. He has had hit singles with the Platinum and #1 "Lover, Lover" and "Drink to That All Night" and the Gold "What Do You Want". As a songwriter Jerrod has written songs for Garth Brooks, Jamey Johnson, Neal McCoy, and more. His tour bus caught fire in 2012 but he was not harmed.