Jello Biafra net worth: Jello Biafra is a former American punk rock singer and spoken word artist who has a net worth of $500 thousand. Born in Boulder, Colorado on June 17, 1958 as Eric Reed Boucher, Biafra is known for being the front man of the popular punk band, Dead Kennedys. He became active in the music industry in 1976 and co-founded Alternative Tentacles Records in 1979 with band mate East Bay Ray.

Biafra is actively engaged in Green Party politics and ran for Presidential nomination in 2000. In 1977, Biafra worked as a roadie for the band The Ravers/The Nails, and shortly after joined a band called The Healers. He attended the University of California, Santa Cruz. Biafra's songwriting nature is of political and sociological perspective with a touch of sarcasm and criticism. His first well-known song record with the Dead Kennedys was "California Uber Alles," followed by "Holiday in Cambodia. IN 1986 Biafra was accused of distributing "harmful material to minors" for the cover art of the band's album Frankenchrist. He argued it as a political statement, and the charges were dropped later that year. During the time of the trial, the Dead Kennedys fizzled out due to rising costs. Biafra began his spoken word career after the band's breakup. His first performance was at the University of California, Los Angeles, and his writing is in the same light as his song lyrics. Biafra has also performed with bands such as Lard, D.O.A., and The Melvins. More recently he appeared in an episode of the TV series Portlandia and released an album with the New Orleans Raunch & Soul Allstars. 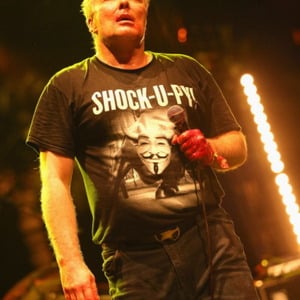