Jedward Net Worth: Jedward is an Irish singing and television presenting duo who has a net worth of $8 million. Jedward consists of identical twins John & Edward. The twins first appeared on the 6th season of The X Factor in 2009 and finished in 6th place. Jedward has released three studio albums.

Their 2010 debut album Planet Jedward reached #1 in Ireland and was certified 2x Platinum. Jedward's next album Victory was released in 2011 and also went on to become certified 2x Platinum and reach #1 in Ireland. Their latest album 2012's Young Love also reached #1 in Ireland and reached the Top 20 in Sweden and Korea. The duo had #1 hit singles with the songs "Under Pressure (Ice Ice Baby"), and "Lipstick". They represented Ireland at the Eurovision Song Contest in 2011 and 2012. Jedward are also known for presenting the children's television series Jedward's Big Adventure and OMG! Jedward's Dream Factory. They also participated in the reality TV series Celebrity Big Brother 8. The duo has been involved with advertising campaigns for Abrakebabra, Shake n' Vac, East Midlands Trains, Rowntree's Randoms, Dragon Quest IX, Scooby-Doo Mystery Machine tour, Disney Universe, and Travel Supermarket. Jedward has won awards from the Sony Radio Academy Awards, the Marcel Bezencon Artistic Award, and the 2012 Bord Gais Energy Social Media Awards. 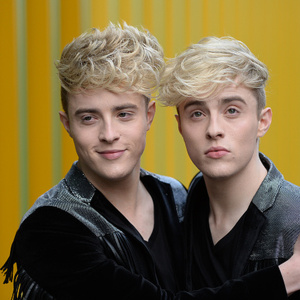