Jay Park net worth: Jay Park is an American singer, rapper, dancer, music producer, model, and actor who has a net worth of $10 million. Jay Park was born in Edmonds, Washington in April 1987. Park is a member of the b-boy crew Art of Movement based in Seattle, WA.

He grew up as a dancer and b-boy. He is his own PR agent and fan club president. Park founded the Korean Independent hip hop record label AOMG and he is a co-CEO. He gained fame as the leader of the South Korean boy band 2PM. He uploaded a cover of B.o.B's hit "Nothin' on You" to YouTube in 2010 and the video went viral and had more than two million views in less than 24 hours. His debut studio album New Breed was released in 2012 and reached #1 on the Korean chart. His second album Evolution in 2014 hit #3 on the Korean chart. Park also had success with the singles "Bestie", "Abandoned", "Tonight", "Demon", "Girlfriend", "Star", "Know Your Name", "Joah", "Metronome", "Promise", and "So Good". In 2013 he won a Korean Music Award for Musician of the Year. In October 2017, it was announced that Jay Park had signed with Jay-Z's Roc Nation record label. 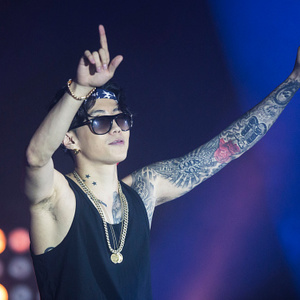