How much is Jane Wiedlin Worth?

Jane Wiedlin net worth: Jane Wiedlin is an American musician, singer-songwriter and actress who has a net worth of $8 million. Jane Wiedlin was born in Oconomowoc, Wisconsin in May 1958. She is best known for being the rhythm guitarist and backup vocalist for the female band The Go-Go's. The Go-Go's formed in 1978 and were the first and only all-female band to write their own songs and play their own instruments that topped the Billboard album charts. Their debut studio album Beauty and the Beast was released in 1981 and reached #1 in the US and #2 in Canada. The Go-Go's also released the albums Vacation in 1982, Talk Show in 1984, and God Bless the Go-Go's in 2001. Their best known singles include "Our Lips Are Sealed", "We Got the Beat", and "Vacation". Jane Wiedlin also released four albums as a solo artist. As an actress she starred as Gretel Barnes in the television series Spyder Games in 2001 and also starred in the movies Clue, Star Trek IV: The Voyage Home, Sleeping Beauty, Bill & Ted's Excellent Adventure, Angels!, Firecracker, Stuck!, The Mandalorian Legacy, The Casserole Club, I Want to Get Married, Doggie B, The Pyrex Glitch, Kissproof World, Roundball, and HoneyBee. 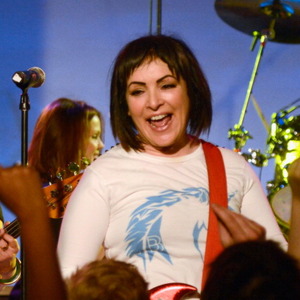