How much is James Carter Worth?

James Carter Net Worth: James Carter is an American jazz musician who has a net worth of $400 thousand. Born in Detroit, Michigan, in 1969, James Carter started playing jazz at a young age. He joined the youth group Bird Trane Sco NOW!! and studied at the Blue Lake Fine Arts Camp. When he was 16 years old, Carter went on his first musical tour, traveling with the International Jazz Band to Scandinavia. Three years later, he was invited to play with Lester Bowie's quintet at a New York City jazz club. Soon after, Carter moved to New York, and has become a well-known fixture in the genre ever since. Carter has worked on close to 20 albums, including 1991's "Tough Young Tenors: Alone Together", 1995's "The Real Quiet Storm", 1996's "Conversin' with the Elders", 2003's "Gardenias for Lady Day", 2009's "Heaven on Earth", and 2011's "At the Crossroads". Carter won several accolades during his career, including the Choice Award for best baritone saxophonist from "Down Beat" magazine for a handful of years. He has played with a variety of well-known musicians, including Wnyton Marsails, the Mingus Big Band, Frank Lowe & the Saxemble, Kathleen Battle, Lester Bowie, the World Saxophone Quartet, and Dee Dee Bridgewater. He most frequently plays the saxophone, flute, and bass clarinet. 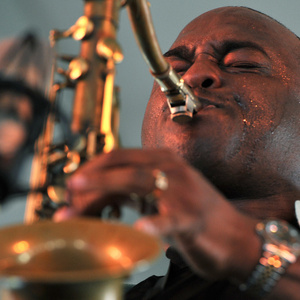