Jagjit Singh Net Worth: Jagjit Singh was a notable Indian Ghazal singer, songwriter and musician who had a net worth of $20 million. Better known as the "Ghazal King", Singh first rose to fame in the 1970s and 1980s along with his wife, Chitra Singh, also a renowned Indian ghazal singer. Born Jagmohan Singh (8 February 1941 – 10 October 2011), he was blessed with a natural talent for music, which would eventually grant him credits for the revival and popularity of ghazal, an Indian classical art form. Together with his wife, he released an album titled Unforgettable in 1977, which was the couple's first LP and it was a herald to their future success. The pair continued to work both on solo and joint musical projects, as well as they performed concerts around the world. Singh also created film sound for features like Prem Geet (1981), Arth and Saath Saath (1982); and TV serials like Mirza Ghalib (1988) and Kahkashan (1991). In his fifty-year long career, he had a repertoire comprising over 80 albums. More precisely, he is the only musician to have composed and recorded songs written by Prime Minister and critically acclaimed poet Atal Bihari Vajpayee, in two albums, Nayi Disha (1999) and Samvedna (2002). 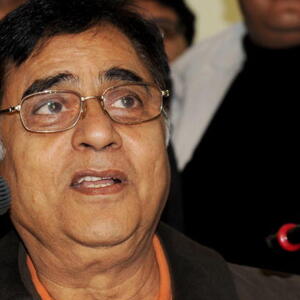