Jackie Evancho net worth: Jackie Evancho is an American classical crossover singer who has a net worth of $4 million. Born in Pittsburgh, Pennsylvania, Jackie Evancho began singing as a child in elementary school in Pennsylvania. In addition to singing, she also plays the piano and violin. She began competing in local talent competitions just after turning 8, and then began to compete nationally.

She also sang with various choirs, including the Children's Festival Chorus of Pittsburgh, performed on PBS, launched a popular YouTube channel, and released a CD. The CD is no longer for sale as her voice has changed considerably. During the summer of 2010, she became a household name when she was selected to appear on "America's Got Talent", after winning the most number of votes via the show's YouTube voting system. She went on to become the runner-up to blues singer, Michael Grimm, and toured with the "America's Got Talent" tour in the fall of 2010. Jackie Evancho made headlines in 2016 when it was announced that she would be one of the main performers at Donald Trump's inauguration. The news helped one of Jackie's albums rocket back up to the #1 position on Billboard. 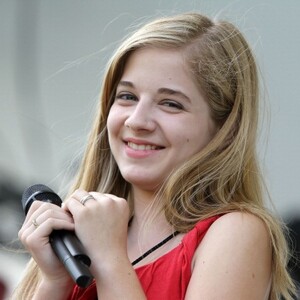