Jackie Beat net worth: Jackie Beat is an American actor, singer, songwriter, and screenwriter who has a net worth of $400 thousand. Jackie Beat was born in West Covina, California in July 1963. Jackie Beat is the drag persona of Kent Fuher. Beat has appeared in several films and episodes of TV series including Grief, Blue Movie, Wigstock: The Movie, Mi Pollo Loco, Scream, Teen, Scream, Downtown Darlings, Charlie!, Flawless, Coming Out Party, Adam & Steve, Bam Bam and Celeste, A Couple of Days and Nights, Alexis Arquette: She's My Brother, Gingerdead Man 3: Saturday Night Cleaver, I Am Divine, Encino Woman, Sex and the City, Totally Gayer, Last Comic Standing, House of Venus Show, Where the Bears Are, and more.

Jackie Beat has also written for the short Two Days at a Time and episodes of the TV series Hype and Tripping the Rift. Jackie Beat is a fixture of the New York City cabaret scene and is the lead signer of the band Dirty Sanchez and a columnist for IN:LA magazine. 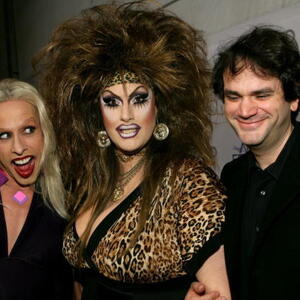