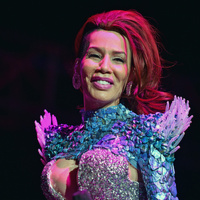 Ivy Queen net worth: Ivy Queen is a Puerto-Rican singer/songwriter, composer, actress, and producer, who has a net worth of $10 million dollars. Ivy Queen, also known as Martha Ivelisse Pesante Rodriguez, was born in Añasco, Puerto Rico, and grew up in the United States in New York City. She attended school until the eleventh grade, and then dropped out. She also studied music at the New Jersey School of Performing Arts. After moving back to Puerto Rico when she was 18, she settled in San Juan, and began working with producer and rap artist, DJ Negro. She subsequently joined the reggaeton group, The Noise. However, after two years with the group, she decided to quite, as she was fed up with the misogyny that was always present in their lyrics. She released her first solo album in 1997, and a second album in 1998. Neither album was hugely successful. She took a break from the music business. She released her third studio album, "Diva" in 2003. The album featured the hit track, "Quiero Bailar", and relaunched her career. Since then she has released six more popular albums, and has received numerous awards.