Idina Menzel Net Worth: Idina Menzel is an American actress and singer/songwriter who has a net worth of $16 million. Although Menzel first rose to prominence after landing a key role in the hit Broadway musical "Rent," she later followed up with a number of notable acting roles both on and off the stage. Idina is known for voicing Elsa in Disney's insanely popular animated film, "Frozen." Not only that, but Menzel also sang the song "Let It Go," which won an Oscar and a Grammy. Idina has won a number of additional awards throughout her career, including one Tony Award. Outside of acting, Menzel has released a number of albums as a singer and musician.

Early Life: Idina Kim Mentzel was born on May 30th of 1971 in Manhattan, New York City. Although she was initially raised in New Jersey, she relocated with her family to Long Island when she was three years old. Idina grew up in a Jewish household alongside a younger sister, and her parents divorced when she was 15. Not long afterward, she gained her first paid singing gig as a wedding and bar mitzvah singer. She kept this job long after she had graduated from high school.

Idina pursued post-secondary education at the famous Tisch School of the Arts at New York University. By 1992, she had earned a Bachelor of Fine Arts degree in drama. During this period, she decided to change her last name from "Mentzel" to "Menzel." This helped with her stage career, as some people had difficulty pronouncing the surname.

Career: Menzel began her career in the world of theatre. Her first big moment came in 1995 when she auditioned for the well-known musical "Rent." She landed the role and made her Off-Broadway debut in 1996. "Rent" quickly became immensely popular and was relocated to a Broadway venue. Idina was singled out for praise by critics in her role as Maureen Johnson and was nominated for a Tony Award for Best Featured Actress in a Musical.

After wrapping up "Rent" in 1997, Idina initially focused on her musical career. She released a solo album entitled "Still I Can't Be Still" before returning to a number of theatrical roles. During this period, she appeared in plays like "Hair," "Aida," "The Wild Party," and "The Vagina Monologues." Although these stage roles helped Menzel gain momentum, her next major accomplishment came in 2003 when she starred in the Broadway musical "Wicked." This role won Idina Menzel a Tony Award for Best Leading Actress in a Musical. Unfortunately, she fell through a trap door on her second-last performance and cracked a rib.

After appearing in the off-Broadway musical "See What I Wanna See," Menzel reprised her role in another run of "Wicked" in London's West End. During this run, she was the highest-paid female performer in the West End with earnings of over $30,000 per week. Another London role came with the musical "Chess" in 2008. Throughout the next few years, Idina starred in plays such as "If/Then," for which she was nominated for another Tony Award.

Throughout her acting career, Menzel has released a number of albums. Although her debut album did not perform well commercially, she followed up with "Here" in 2004. In 2008, she released a third solo album entitled "I Stand." This time, Idina made it onto the charts for the first time. On the heels of this success, Menzel toured to support her album. Her tours would take her across the United States and to international venues in Australia and other countries. After releasing a Christmas album in 2014, Menzel sang the national anthem at the Super Bowl in 2015. One year later, she released her fifth album, which was entitled "Idina."

Outside of stage work and music, Idina Menzel has experienced considerable success as a film and television actor. She was an obvious choice to portray Maureen Johnson in the 2005 film adaptation of "Rent," and she later booked a recurring role on the series "Glee." In 2013, Idina voiced Elsa in the animated film "Frozen." The film was a commercial and critical success, and perhaps the greatest Disney movie of the modern era. It managed to gross more than $1.28 billion at the box office, making it the highest-grossing animated film at the time.

Idina contributed immensely to this success, recording the hit song "Let It Go," which won an Academy Award and a Grammy Award. Idina later reprised her role in "Frozen II." In 2017, Menzel starred in the film "Beaches," and in 2019 she booked a central role in the Adam Sandler film "Uncut Gems."

Relationships: Idina's first marriage was to actor Taye Diggs, whom she met during the production of "Rent." After marrying in 2003, the pair welcomed their first child into the world in 2009. Four years later, the pair separated, and their divorce was finalized in 2014. One year passed before Menzel started a relationship with Aaron Lohr – another actor who starred in "Rent." The pair moved in together later in 2015, and they were married in 2017.

Real Estate: In 2015, it was reported that Idina and her then-boyfriend Aaron Lohr purchased a home together in Encino, California. The Mediterranean-style residence sits on about three-quarters of an acre and boasts over 4,700 square feet of living space. As one might expect for a Californian home fit for a celeb, there is also a pool and spa in the yard. In addition, the property affords stunning views of the canyon and cities beyond. 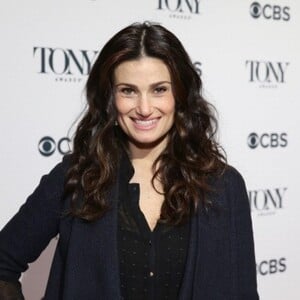