Hunter Hayes is an American country music singer and songwriter who has a net worth of $4.5 million. Hunter Hayes has earned his net worth as a country music singer and songwriter with Atlantic Records in Nashville. He released his debut single titled "Storm Warning" on May 16, 2011. On October 11, 2011 he released his self-titled debut album. Hunter was born on September 9, 1991 in Breaux Bridge, Louisiana to Lynette and Leo Hayes. At the young age of two, his grandmother gave him a toy accordion. Later when he was four, he began making appearances on shows like Maury Povich, Rosie O'Donnell, and the Nickelodeon series Figure It Out. At the very young age of six, actor Robert Duvall gave Hunter his first guitar. When Hunter was only 13 he starred on the TV show "America's Most Talented Kids". In 2008 he signed with Universal Music Publishing Group after relocating from Breaux Bridge, Louisiana to Nashville, Tennessee to be a songwriter. In 2011 Hayes starred as the opening act for country star Taylor Swift on her worldwide tour. Hayes started to really gain attention when he perform during the Swift's "Speak Now Word Tour". Hayes is well-known for his collaboration with Victoria Justice in the 2011 remake of the movie Footloose. In the movie, Hayes and Justice performed the 1984 classic hit by Ann Wilson and Mike Reno from the original Footloose film. 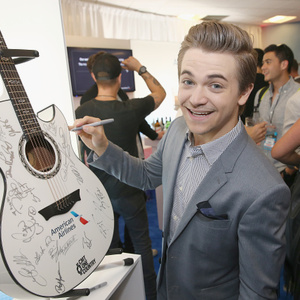