How much is Howie Day Worth?

Howie Day Net Worth: Howie Day is an American musician who has a net worth of $2 million dollars. Born Howard Kern Day in 1981 in Brewer, Maine, Howie Day began playing the piano when he was five years old. By the time he was a teenager, he developed an interest in the electric guitar. He started playing at a local restaurant and soon joined a local band. In 1998, he created his demo EP with two original songs and several popular covers. He self-financed his debut album, "Australia", in 2000. He moved to London to create his follow-up album, "Stop All The World Now", which finally went gold in 2005 after several years on the market. His single, "Collide", went platinum with more than one million copies sold, climbing to number 20 on the U.S. charts. Since then, Day has released his third CD, "Sound the Alarm", which charted at number 82 in the United States. He has faced two high-profile encounters with law enforcement. In 2004, he was charged with allegedly locking one fan on his tour bus and breaking another's phone. A year later, he was arrested a second time and accused of verbally berating the crew on a flight after he took sleeping pills and drank alcohol. Day was put on probation in 2006 for the second incident. 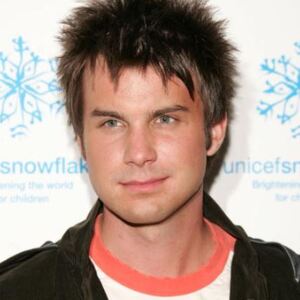