How much is Herbie Hancock Worth?

Herbie Hancock Net Worth: Herbie Hancock is an American pianist, keyboardist, bandleader and composer who has a net worth of $12 million dollars. Herbie Hancock was born on April 12, 1940 in Chicago, Illinois where he was considered a musical child prodigy. In May 1963, he joined Davis's Second Great Quintet where helped to redefine the role of a jazz rhythm section and was one of the primary architects of the post-bop sound. He was one of the first jazz musicians to embrace music synthesizers and funk music. Hancock's best-known solo works include "Cantaloupe Island", "Watermelon Man", "Maiden Voyage", "Chameleon", and the singles "I Thought It Was You" and "Rockit". In 1986 Hancock won the Academy Award for 1986, Original Soundtrack, for "Round Midnight". He has won 14 Grammy Awards. His 2007 tribute album River: The Joni Letters won the 2008 Grammy Award for Album of the Year, only the second jazz album ever to win the award In 2013 Hancock joined the University of California, Los Angeles faculty as a professor in the UCLA music department where he will teach jazz music. Hancock is the 2014 Charles Eliot Norton Professor of Poetry at Harvard University. Holders of the chair deliver a series of six lectures on poetry. 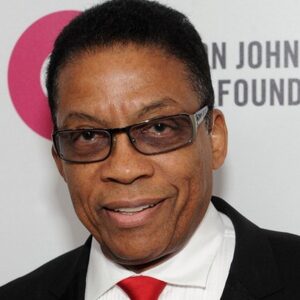