What was Hank Williams's Net Worth?

Hank Williams, Sr. was an American singer-songwriter and musician who had a net worth equal to $100 thousand at the time of his death after adjusting for inflation (approximately $10 thousand in 1953). According to several books about his life, Hank's highest earning years were 1951 and 1952. In both of those years he made slightly over $100,000, which is the same as around $1 million today. Unfortunately, when Hank and his wife divorced, she took him for nearly every penny he had. His ex-wife was awarded half of Hank's royalties, their house, furniture, kids… At the time of his death, Hank was essentially penniless, living in a modest one bedroom apartment with his new wife.

Hank Williams is considered to be one of the most influential musical artists of the 20th century. Over the course of his brief career, he had 55 singles that made it onto the top ten of the Billboard Country & Western chart, and 12 that reached number one. After years of alcoholism and substance abuse, Williams passed away at the age of 29 in 1953.

He got started performing on the radio and backed up the Drifting Cowboys band. Williams only released two studio albums while alive: Hank Williams Sings in 1951 and Moanin' the Blues in 1952. His #1 country singles include "Lovesick Blues", "Long Gone Lonesome Blues", "Why Don't You Love Me", "Moanin' the Blues", "Hey Good Lookin", "Jambalaya (On the Bayou)", "Your Cheatin' Heart", "Kaw-Liga", and "Take These Chains from My Heart". He had health problems related to back pain, prescription drug abuse, and alcoholism. Williams was posthumously inducted into the Country Music Hall of Fame, the Songwriters Hall of Fame, and the Rock and Roll Hall of Fame. His son Hank Williams, Jr. also became a successful musician. Hank Williams, Sr. passed away on January 1, 1953 at 29 years old.

Hank Williams was born as Hiram Williams on September 17, 1923 in Mount Olive, Alabama as the third child of Freemason parents Jessie and Elonzo. He had a brother named Ernest who passed away shortly after his birth, as well as a sister named Irene. Notably, Williams was born with a congenital condition affecting his spinal column, causing lifelong pain. At the age of seven, his father began suffering from facial paralysis, and was hospitalized for most of Williams's childhood. In 1934, the family moved to Greenville, Alabama; they continued to move in the subsequent years, first to Garland and then Georgiana. In these places, Williams's mother made money by opening boarding houses and taking a number of odd jobs.

While residing in Georgiana, Williams met a street performer named Rufus Payne who gave him extensive guitar lessons. The two eventually lost touch when Williams moved with his family to Montgomery.

In 1937, Williams participated in a talent show at the Empire Theater in Montgomery. Singing his first original song, "WPA Blues," he won the first-place prize. On the weekends and after school, Williams sang and played guitar outside of the WSFA radio studio. Eventually, he was invited to perform on air, and was given his own biweekly show. The show was such a success that Williams started his own band, the Drifting Cowboys, which toured throughout Alabama and parts of Georgia and Florida.

The Drifting Cowboys fell apart when the US entered World War II in 1941. Williams was medically disqualified from service due to a back injury, while the other members of the band were all drafted. During this time, Williams began abusing alcohol, and often arrived at his radio show plastered. For the remainder of the war, he worked for a shipbuilding company in Mobile, and sang for soldiers in bars. Back in Montgomery in 1945, he returned to his radio show, and wrote and performed songs on the air.

Williams got his big break in 1946, when he signed a six-year contract with Sterling Records. Among his early recordings were "Never Again" and "Honky Tonkin," which were both successes. Moreover, they drew the attention of MGM Records, to which Williams subsequently signed in 1947. He went on to release the huge country hit "Move it on Over," and joined the radio show "Louisiana Hayride." Williams had his next big hit with his cover of "Lovesick Blues," which remained at number one on the Billboard charts for four straight months. Due to this success, he earned a place at the Grand Ole Opry, where he made his debut in 1949 and became the first performer ever to receive six encores. Williams continued his success with the release of such hit songs as "Wedding Bells," "Mind Your Own Business," and "My Bucket's Got a Hole in It." 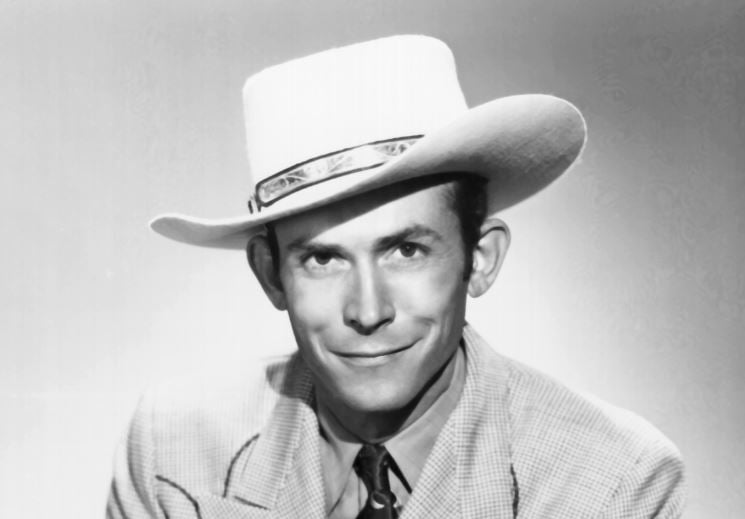 Peak of Career in the 50s

Williams hit his career peak in the early 50s, releasing a plethora of hit songs including "My Son Calls Another Man Daddy"; "Why Should We Try Anymore"; "Nobody's Lonesome for Me"; "Long Gone Lonesome Blues"; "Moanin' the Blues"; and "Cold, Cold Heart." In the summer of 1951, he drew widespread recognition for his Hadacol tour of the United States. Following this, Williams signed a movie deal with MGM. He went on to record numerous further hit songs, such as "Jambalaya (On the Bayou)," "Window Shopping," "You Win Again," and "I Won't Be Home No More."

Due to his habitual drunkenness, Williams was expelled from the Grand Ole Opry in 1952. Returning to Louisiana, he resumed his performances on the KWKH and WBAM shows. He had his last recording session in September, and by the end of the year, was suffering from heart problems. In Oklahoma City, Williams met Horace Marshall, who falsely claimed to be a doctor; he ended up prescribing Williams with a bevy of dangerous drugs that worsened his condition. Williams held the final concert of his career in Austin, Texas in December.

In 1944, Williams wed Audrey Sheppard; together, they had a son named Randall, who became the musician Hank Williams Jr. A highly tumultuous marriage, in large part due to Williams's substance addictions, the couple divorced in 1952. Shortly before their split, Williams had a brief affair with dancer Bobbie Jett, who birthed their daughter Jett days after Williams passed away. In October of 1952, Williams married Billie Jean Jones; however, the wedding was declared legally invalid because Jones's own divorce had not become final until after she married Williams.

On New Year's Eve in 1952, Williams was scheduled to perform in Charleston, West Virginia. However, he could not make it due to an ice storm where he was in the Nashville, Tennessee area. Instead, Williams was to be driven by Charles Carr to Canton, Ohio for a New Year's Day concert. After checking into a hotel in Knoxville, Williams was badly affected by the alcohol and chloral hydrate he had consumed on the way there. A doctor injected him with vitamin B12 and morphine. Two days later, during a stop at a gas station in Oak Hill, West Virginia, Carr realized that Williams had died in the car and had developed rigor mortis. His body was transported to Montgomery, Alabama, where he was buried. A posthumous single entitled "Take These Chains From My Heart" reached number one on the country charts in April of 1953.