How much is Hank Williams Jr Worth?

Hank Williams Jr Net Worth: Hank Williams Jr. is an American country musician who has a net worth of $45 million dollars. Born in Shreveport, Louisiana, in 1945 as Randall Hank Williams, Hank Williams Jr. is the son of country rock star Hank Williams. The younger Williams' career began by impersonating his father until he developed his own style. In the early '70s, he fell into drug and alcohol abuse and moved to Alabama to get clean. In 1975, he nearly died in a mountain climbing accident in Montana after he fell nearly 500 feet when snow collapsed beneath him. Since then, he has rarely been seen without his beard, hat and sunglasses, which he originally began wearing to cover his scars. The next decade brought considerable musical success for Williams, who released dozens of albums, including "Whiskey Bent and Hell Bound", "Habits Old and New", "The Pressure Is On", "Major Moves" and "Man of Steel". All 21 of his albums between 1979 and 1992 went at least gold and he released 30 singles that would climb into the top ten. Eight of those songs topped the charts. He was the County Music Association's Entertainer of the Year in 1987 and 1988 and the Academy of County Music's Entertainer of the Year from 1987 until 1989. Williams continued to release new music, with more than 35 albums dropping between 1964 and 2012. The Grammy Award winner is actively involved in politics. He remade one of his songs into a support anthem for the Bush-Cheney campaign in 2000 and rallied for McCain-Palin several years later. He considered a run for Senate in Tennessee, but opted not to campaign, and openly speaks out in opposition to President Barack Obama. 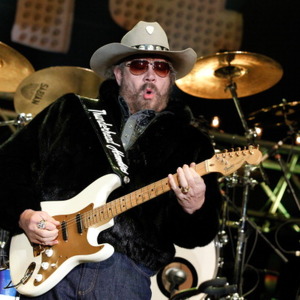