How much is Grimes Worth?

Grimes net worth: Grimes is a Canadian artist, songwriter and musician who has a net worth of $3 million dollars. She is also known for having a child with billionaire Elon Musk. The two began dating in May 2018 and welcomed a child in May 2020.

Grimes was born Claire Elise Boucher on March 17, 1988 in Vancouver, British Columbia. She began recording and writing music under the name Grimes in 2007. Her debut album Geidi Primes was released in 2010 on cassette tape. She released her second album, Halfaxa, later the same year. From that point on she began touring extensively as the Grimes persona. In January 2012 she signed a record deal with 4AD. She released the album Visions in 2012. This album was her breakout hit after receiving widespread critical and fan acclaim. In December 2013, she signed to Jay-Z's Roc Nation management company. Her songs have appeared on a number of soundtracks and Grimes still tours extensively today. Outside of music, Grimes is a prolific visual artist. She illustrates her own merchandise and has had illustrations appear in museums around the world. She is a vegetarian who does not do hard drugs.

In May 2018 it was reported that Grimes was in a relationship with billionaire Elon Musk.

In May 2020 Grimes and Elon welcomed a child together. They reportedly named the boy X Æ A-12 Musk. 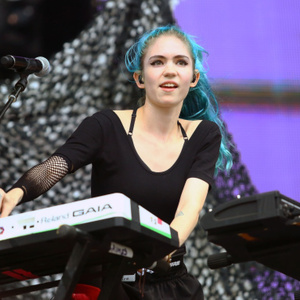