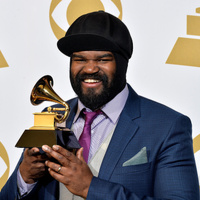 Gregory Porter net worth: Gregory Porter is an American singer, songwriter, and actor who has a net worth of $3 million. He is best known for his jazz albums Liquid Spirit and Take Me to the Alley.

Gregory Porter was born in Sacramento, California in November 1971. His musical styles include jazz, blues, soul, and gospel. Porter released his debut studio album Water in 2010 and the album Be Good in 2012. His album Liquid Spirit was released in 2013 and reached #6 in the Netherlands, #7 in Denmark, #8 in Germany, and #9 in the UK. Porter released the album Take Me to the Alley in 2016 which reached #5 in the UK and the Netherlands and #8 in Belgium and Germany. His album Nat King Cole & Me was released in 2017 and reached #3 in the UK. His singles include "Liquid Spirit" which reached #5 in Belgium. Gregory Porter was featured on the single "Holding On" by Disclosure which reached #5 on the UK Dance chart.