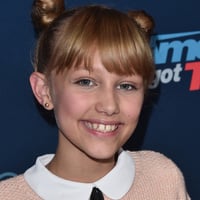 Grace VanderWaal net worth: Grace VanderWaal is an American singer and songwriter who has a net worth of $2 million. Grace VanderWall was born in Kansas City, Kansas in January 2004. She is best known for winning the 11th season of the reality television series America's Got Talent in 2016 when she was 12 years old. VanderWaal plays the ukulele and signed with Columbia Records. Her debut EP Perfectly Imperfect was released in 2016 and reached #9 on the Billboard 200 chart and #11 in Canada. VanderWaal had moderate success with the singles "I Don't Know My Name" and "Moonlight". She is popular on YouTube where she creates videos of covers and original songs. VanderWaal performed at the opening and closing ceremonies of the 2017 Special Olympics World Winter Games. In 2016 she won a Radio Disney Music Award for Best New Artist and in 2017 she won a Teen Choice Award for Choice Next Big Thing.