Gloria Trevi Net Worth: Gloria Trevi is a Mexican musician who has a net worth of $40 million. Born in 1968 in Monterrey, Nuevo Leon, Mexico, Gloria de los Angeles Trevino Ruiz, is one of Mexico's best known pop stars. Trevi started working on her music career in Mexico City before her 13th birthday.

She joined the all-female group Boquitas Pintadas in 1985, and decided to pursue a solo career after the band broke up in 1988. Her debut album, "Que Hago Aqui?", hit the charts in 1989 and one of its singles, "Dr. Psiquiatra", earned Trevi her first number one hit. Trevi followed it up with 1990's "Tu Angel de la Guarda", 1992's "Me Siento Tan Sola", 1994's "Mas Turbada Que Nunca", 1995's "Si Me Llevas Contigo", 2004's "Como Nace El Universo", 2007's "Una Rosa Blu", 2011's "Gloria", and 2013's "De Pelicula". "Una Rosa Blue" was Trevi's first album not to claim the number one spot on the Mexican charts. She has had a handful of singles top the U.S. Latin charts, including "Pelo Suelto" and "La Papa Sin Catsup" in the early '90s. She has sold more than 20 million records around the world and is considered the Supreme Diva of Mexican Pop and sometimes the Madonna of Mexico. In 2000, she was arrested for allegedly corrupting minors in Rio de Janeiro, Brazil. She announced her pregnancy while she was behind bars. Trevi was eventually cleared after a lack of evidence after spending close to five years in prison. She has been married to her husband, attorney Armando Gomez, since 2009, and lives in Texas. 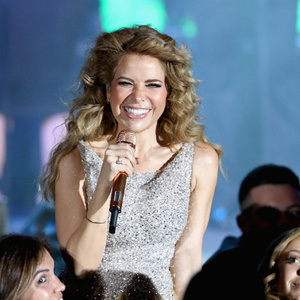