How much is Glennis Grace Worth?

Glennis Grace net worth: Glennis Grace is a Dutch singer who has a net worth of $500 thousand dollars. Glennis Grace was born in Amsterdam, Netherlands in June 1978. She was initially discovered in 1994 after winning a Dutch TV talent show called Soundmixshow. She competed in the 2005 Eurovision Song Contest. Grace became popular after she won a Dutch television talent show. She released her debut studio album My Impossible Dream in 2005. Glennis Grace has also released the albums Glennis, in 2008, and One Moment in Time, in 2011. Her albums One Night Only and This Is My Voice both reached #2 on the Dutch Album Top 100 chart. In 2012 she formed a Dutch female supergroup called Ladies of Soul which went on to release a number of albums. As a solo artist, she also released the albums One Christmas Night Only, in 2013, Cover Story, in 2014, Live at the Ziggo Dome, in 2014, and Bitterzoet – Live & Studio Sessions, in 2015. In 2018 she competed on the 13th season of the reality TV series America's Got Talent where she blew the audience and judges away. She is often compared to singer Whitney Houston and sung Whitney's "Run to You" during the audition round of AGT. She would go on to sing songs by Prince, Kate Bush and Snow Patrol. Each time she has performed on the show, she has received a standing ovation. If she wins America's Got Talent, Glennis Grace will receive a $1 million prize and will get the chance to headline a show in Las Vegas. Glennis was married to Moos Majri from 2006 – 2012. She has been married to Levy Allessio since 2017. She has one child from her first marriage, a son named Anthony. 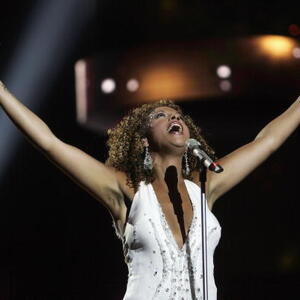