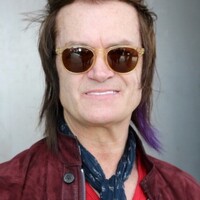 Glenn Hughes net worth: Glenn Hughes is an English musician and singer who has a net worth of $3 million. Glenn Hughes was born in Cannock, Staffordshire, England in August 1951. He is best known for being the bass player and vocalist for the rock bands Trapeze, Deep Purple, and Black Sabbath. Hughes has also been an active session musician and has a solo career. He was part of the third and fourth line-ups of Deep Purple and was briefly the front man for Black Sabbath in the mid-1980s. Hughes fronted the super groups Black Country Communion and California Breed. Hughes released his debut solo album Play Me Out in 1977 and has released 14 solo albums total. With the band Trapeze he released three studio albums and one live album. As a member of Deep Purple he has been featured on three studio albums and many live albums. He has also been featured on albums by Hughes/Thrall, Gary Moore, Tony Iommi, Voodoo Hill, Hughes Turner Project, Black Country Communion, and California Breed.