Gladys Knight net worth: Gladys Knight is an American singer/songwriter who has a net worth of $28 million dollars. Born May 28, 1944 in Oglethorpe, Georgia, Gladys Knight made her solo debut at the tender age of 4, singing at the Mount Mariah Baptist Church in Atlanta, Georgia, and began singing with her siblings, at the age of 8, in a group they called 'The Pips'. The group went on to open for such R&B greats as Jackie Wilson and Sam Cooke, enjoyed a stint at Motown records then headed to Buddah Records in 1973, where they successfully crossed over to pop music. Gladys Knight and the Pips recorded what was to become their signature song, Midnight Train to Georgia, in 1973. By the mid-seventies, the group was riding high. In the summer of 1975, they hosted their own TV special and in 1976 Knight made an appearance in the film Pipe Dreams, for which she and The Pips also recorded the soundtrack. Gladys Knight and the Pips moved to MCA Records in 1988 and released their final album together, All Our Love, which included the Grammy-winning single Love Overboard. Knight launched a solo career that next year and recorded the title track for the James Bond movie License to Kill (1989), along with guest stars Dionne Warwick and Patti Labelle. Knight married her first husband, Atlanta, Georgia musician Jimmy Newman, at the age of 16. The marriage produced two children before Newman, a drug addict, abandoned the family and died only a few years later. Her second marriage to Barry Hankerson ended in 1979 after a five-year custody battle over their son, Shanga. Knight went on to marry author and motivational speaker Les Brown in 1995 and their marriage ended in 1997. In 2001, she married William McDowell, a corporate consultant. 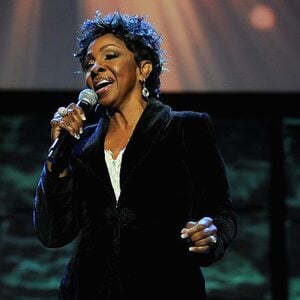