He took part in his first concert while still a teenager and in 1976, Gilberto made his recording debut as a backup singer with the Mario Ortiz Orchestra and was soon recruited by La Grande Orchestra, where he became the lead singer. Gilberto remained with the orchestra for two years, during which time he met Elias Lopez, who helped to mold and polish him as a singer. By 1986, he had his own band and was signed to Combo Records and a string of hits followed: Good Vibration, De Amor y Salsa (Of Love and Salsa), Punto de Vista (Point of View), Vivir Sin Ella (Living without Her) and Perspectiva. Gilberto Santa Rosa was the first singer of tropical salsa to carry out a concert at the Carnegie Hall Theater, in New York, where he performed as the opening number his unique version of the salsa tune Represento (I Represent). This event was recorded live at the hall, and later released as an album. In 1990, Gilberto joined the all-star La Puertoriqueña project which included Andy Montañez. That same year he was awarded the Billboard Lo Nuestro Award for Best Male Singer. During the 2000s, Gilberto continued to make albums, perform live and receive awards. In June 2008, 'Contraste' received Gold and Platinum certification from the Recording Industry Association of America (RIAA) and reportedly his album sold over 1,500,000 copies. On July 5, 2008, Gilberto became the first salsa singer to perform at the Palau de la Música in Barcelona-the event was sold out with an attendance of 2,000.

On July 17, 2010, he participated in the opening ceremony of the 2010 Central American and Caribbean Games. Gilberto Santa Rosa was also honored by Union City, New Jersey with the key to the city and a star on the Walk of Fame at Union City's Celia Cruz Park. As of 2010, he holds the record for the most No. 1 albums on the Billboard Tropical Albums chart. 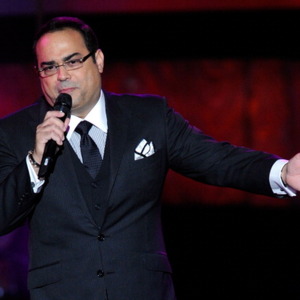