George Canyon net worth: George Canyon is a Canadian country music singer and actor who has a net worth of $10 million. George Canyon was born in Pictou County, Nova Scotia, Canada in August 1970. He was the runner up on the reality TV series Nashville Star 2 in 2004. Canyon holds an appointment as the Colonel Commandant of the Royal Canadian Air Cadets in the Canadian Forces.

His debut studio album Ironwolf was released in 1996. His most successful album was 2011's Better Be Home Soon which reached #25 in Canada. Canyon has won Juno Awards for Country Recording of the Year in 2005 and 2007. He has also won many Canadian Country Music Association Awards including Male Artist of the Year in 2005 and 2006. As an actor he has had recurring roles in the TV series Trailer Park Boys in 2007 and Heartland in 2008. Canyon has also starred in the movies Dawn Rider, Christmas Miracle, Man of Steel, and Lonesome Down Church. He was named the official anthem singer for the Calgary Flames of the NHL in 2014. 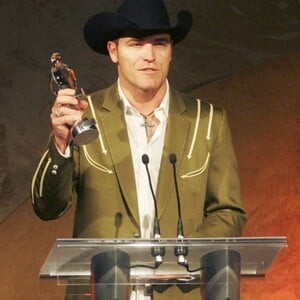