What was Gene Autry's Net Worth?

Gene Autry was an American singer, songwriter, actor, musician, and rodeo performer who had a net worth equal to $500 million at the time of his death, after adjusting for inflation. Autry rose to fame as a singing cowboy and starred in film, television, and radio projects.

Gene appeared in more than 90 movies from 1934 to 1953, including "Comin' Round the Mountain" (1936), "Oh, Susanna!" (1936), "The Last Round-Up" (1947), and "Riders in the Sky" (1949), and he starred on "The Gene Autry Show" (which he also produced) from 1950 to 1956. His signature song was "Back in the Saddle Again," and he was known for the Christmas songs "Rudolph, the Red-Nosed Reindeer," "Here Comes Santa Claus," "Frosty the Snowman," and "Up on the House Top." Autry published the autobiography "Back in the Saddle Again" in 1978. He enlisted in the U.S. Army in the '40s, then he became a tech sergeant in the Army Air Forces, earned his Service Pilot rating, and served as a C-109 transport pilot. Gene was inducted into the Country Music Hall of Fame (1969) and the Nashville Songwriters Hall of Fame (1970), and he is the only person to receive stars on the Hollywood Walk of Fame in all five categories. Sadly, Autry passed away from lymphoma in October 1998 at the age of 91.

Gene Autry successfully parlayed his fame into a business empire that ultimately included vast real estate holdings, a professional baseball team, hotels, a television studio, and several radio stations. Gene acquired the Anaheim Angels in 1960 and held the team until his death. He actually sold a portion to Walt Disney in 1995, then his widow sold the remainder of the team a year after his death. In 1982, Autry sold the KTLA television station for $245 million. At the time of his death, his worth was estimated at $320 million. That was enough to make him one of the 400 richest Americans.

Gene Autry was born Orvon Grover Autry on September 29, 1907, near Tioga, Texas. His parents, Elnora Ozment and Delbert Autry, moved the family to southern Oklahoma in the '20s, and Gene worked on Delbert's ranch as a teenager. Autry had three siblings, sisters Veda and Wilma and brother Dudley. Gene dropped out of high school in 1925 and found work as a telegrapher for the St. Louis–San Francisco Railway.

Though Autry got fired for singing and playing guitar to pass the time at his telegraph operator job in Chelsea, Oklahoma, a customer, humorist Will Rogers, suggested that he sing professionally. Gene began singing on the Tulsa radio station KVOO in 1928 as "Oklahoma's Yodeling Cowboy," and he signed with Columbia Records the following year. He spent four years working on the Chicago WLS-AM radio show "National Barn Dance," and in the early '30s, he recorded several "hillbilly"-style songs. Autry had his first hit with 1932's "That Silver-Haired Daddy of Mine," a duet that he wrote and performed with Jimmy Long. Gene made more than 600 recordings and sold over 100 million records, one of which was the first-ever record to be certified Gold. Several of Autry's singles reached #1 on the "Billboard" country chart, including "I'm Beginning To Care," "Were You Sincere," "You Are My Sunshine," and "Deep in the Heart of Texas." 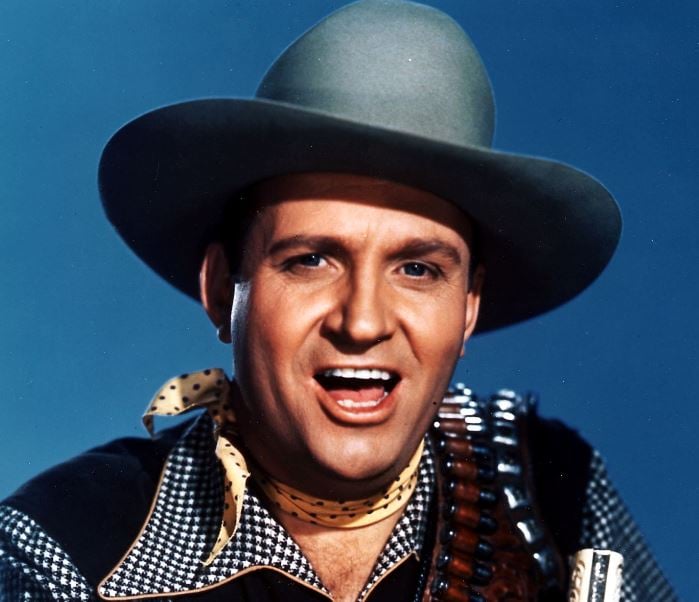 Gene married Ina Mae Spivey, the niece of his "That Silver-Haired Daddy of Mine" duet partner Jimmy Long, on April 1, 1932. During the marriage, Autry had an affair with actress Gail Davis, who played the title role on the "Annie Oakley" TV series he produced. Spivey died in May 1980, then Gene married Jacqueline "Jackie" Ellam on July 19, 1981. Gene and Jackie remained married until his death in 1998. Autry was a lifetime member of the Benevolent and Protective Order of Elks, and he was a registered Republican as well as a supporter of the Civil Rights Movement.

In 1942, Autry earned an Academy Award nomination for Best Music, Original Song for "Be Honest with Me" from "Ridin' on a Rainbow." He received a Grammy Lifetime Achievement Award in 2009, and he won a Special Award of Merit at the 1987 ICG Publicists Awards. At the Golden Boot Awards, Gene earned a Golden Boot in 1983 and a Founder's Award in 1995. He received five stars on the Hollywood Walk of Fame: for Radio, Recording, Television, and Motion Picture in 1960 and Live Performance in 1987. For his contributions to the rodeo, Autry was inducted into the National Cowboy Hall of Fame and Western Heritage Center's Hall of Great Western Performers (1972) and Hall of Great Westerners (1980), ProRodeo Hall of Fame (1979), Texas Trail of Fame (1988), and Texas Rodeo Cowboy Hall of Fame (2013).

In November 1941, the town of Berwyn, Oklahoma, was renamed Gene Autry; Gene bought the Flying A Ranch, which was on the edge of Berwyn, in 1939. In 1977, the Freedoms Foundation of Valley Forge, Pennsylvania, awarded Autry the American Patriots Medal, and he received the American Academy of Achievement's Golden Plate Award in 1983. Gene Autry Trail in Palm Springs, California, and Gene Autry Way in Anaheim, California, are named in his honor, and the Interstate 5–State Route 134 interchange near L.A.'s  Autry National Center is called the Gene Autry Memorial Interchange. Autry was inducted into the Oklahoma Hall of Fame (1991) and National Radio Hall of Fame (2003), and he was a charter member of Richmond, Indiana's Gennett Records Walk of Fame.

In 1997, Gene and Jackie paid $2.05 million for a nearly 13,500 square foot home in Palm Springs, California. Built in 1927, the property includes five bedrooms, four bathrooms, a three-car garage with an attached apartment, an outdoor kitchen, and a tennis court. Jackie put the home on the market for $8.25 million in early 2020. In April 2020 the home sold for $7 million. Today the property is worth north of $11 million. Here's a video tour: 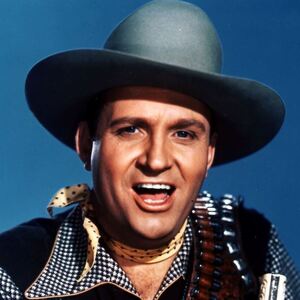