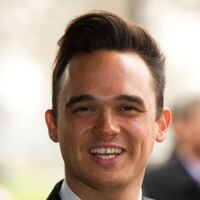 Gareth Gates net worth: Gareth Gates is an English singer and songwriter best known as the runner-up in the first season of Pop Idol. Gareth Gates has a net worth of $5 million.

Gareth Gates was born in West Bowling, Bradford, England in 1984. Gareth Gates has three sisters and the siblings all attended Dixons City Technology College where he studied music and art. Gareth Gates showed an early aptitude for singing and joined the Bradford Cathedral choir when he was nine-years old. By the time he was 11, he was the head singer of the choir and sang a solo for the Queen when she visited Bradford in 1997. Prior to making the finals of Pop Idol, Gates was set to study at the Royal Northern College of Music in Manchester. Gareth Gates was the runner-up to 2002 Pop Idol winner Will Young. Despite not winning, Simon Cowell signed Gates to his label. Gareth Gates' first single was a cover of "Unchained Melody" and it entered the UK Singles Chart at number one, went double-platinum, and was named 2002's Record of the Year by ITV viewers. Gates next three singles all reached number one. Gareth Gates has sold more than 3.5 million records in the UK. He has also made it well-known that he had a stutter as a youth, and is now a coach for the program that helped him overcome his speech impediment.