Fred Hammond Net Worth: Fred Hammond is an American gospel singer and record producer who has a net worth of $500 thousand dollars. Fred Hammond was born December 27, 1960, in Detroit, Michigan. For more than 25 years, music lovers around the world have known Fred Hammond as a talented songwriter, bassist and vocalist.

He is also known throughout the music industry as a gifted musical arranger and producer. His work with Face to Face Productions, the company for which he is both founder and CEO, earned him the title the "Babyface" of gospel. A multi-instrumentalist, producer and vocalist for the soulful black gospel group Commissioned during the '80s and '90s, Fred Hammond also became one of the most popular praise & worship leaders in the field. Hammond began singing with his church choir at the age of 12. He also played bass and sang with the Winans during the early '80s then joined Commissioned later that decade, showcasing his superb arranging, production and songwriting skills as well as his soaring vocals. Hammond's concurrent solo career began in 1991 with I Am Persuaded, and he released additional albums for Benson, gradually embracing an in-concert feel even on his studio recordings. His fifth studio album, Purpose By Design, was released under the Verity label in 2000. In Case You Missed It as well as And Then Some followed in 2001. Hammond produced Make Me Like The Moon, a stirring gospel ballad co-written by Chanté Moore and Kenny Lattimore, for their 2006 double-CD of gospel and R&B love songs entitled Uncovered/Covered (released October 10, 2006 by LaFace/Verity/Zomba Music Group). He also performed with rapper Sean Combs (aka Puff Daddy, P. Diddy, Diddy) on the album Thank You. Hammond set up his own label imprint, Hammond Family Entertainment, and released the CD/DVD set Life in the Word in 2010. 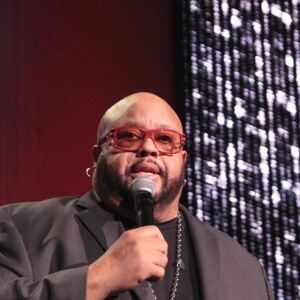