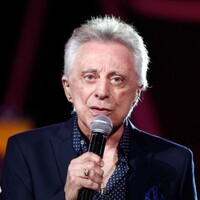 What is Frankie Valli's Net Worth?

Frankie Valli is an American popular singer who has a net worth of $80 million. Frankie Valli first became internationally known as the lead singer of The 4 Seasons. He then enjoyed a lucrative solo career. Frankie also earns significant royalties off the hit Broadway play "Jersey Boys" which has grossed over $3 billion worldwide to date.

He was born Francesco Stephen Castelluccio on May 3, 1934, in Newark, New Jersey, to Anthony Castelluccio, a barber, and Mary Rinaldi, a beer company employee. Valli was inspired to take up a singing career at the age of seven, when his mother took him to see Frank Sinatra perform in Manhattan. One of his favorite singers was Jean Valli, from whom he adopted his stage name. Valli worked as a barber to support himself while concentrating on forging a career as a musician.

Valli began his singing career in the early '50s with the Variety Trio, which included Nickie DeVito, Tommy DeVito, and Nick Macioci. The group had heard him sing and offered him a guest spot in one of their performances. In late 1952, the Variety Trio disbanded and Valli and Tommy DeVito became part of the house band at The Strand in New Brunswick, New Jersey. Along with singing, Valli also played bass. Valli cut his first single, "My Mother's Eyes," a cover of the 1929 George Jessel song. Around this time, Valli and DeVito left the house band at The Strand and formed the Variatones with Hank Majewski, Frank Cattone, and Billy Thompson. In 1965, the band impressed New York record exec Peter Paul, who had them audition at RCA Victor the next week.

The group renamed themselves the Four Levels and recorded several singles and one album's worth of tracks. In 1956, they had a minor hit with "You're the Apple of My Eye." The group performed together until 1959 and then Bob Gaudio became a member. After a few more line up changes, the group was renamed The 4 Seasons. The got the name from a cocktail lounge they were at after auditioning in a big suburban bowling alley.

Valli's unusually powerful falsetto voice is the signature sound behind dozens of chart-topping hits by the New Jersey-based group The Four Seasons. Throughout the '60s, Valli along with his friends and band-mates De Vito and Maciocii and teenage prodigy Bob Gaudio scored 29 Top 40 hits. They include danceable hit singles like Sherry (1962), Big Girls Don't Cry (1962), Walk Like a Man (1963), Rag Doll (1964) and Let's Hang On! (1965) among others.

Valli was the original artist to record the Bob Crewe-produced composition "The Sun Ain't Gonna Shine (Anymore.)." This performance was copied nearly note for note when the Walker Brothers recorded it–their version became a huge success. 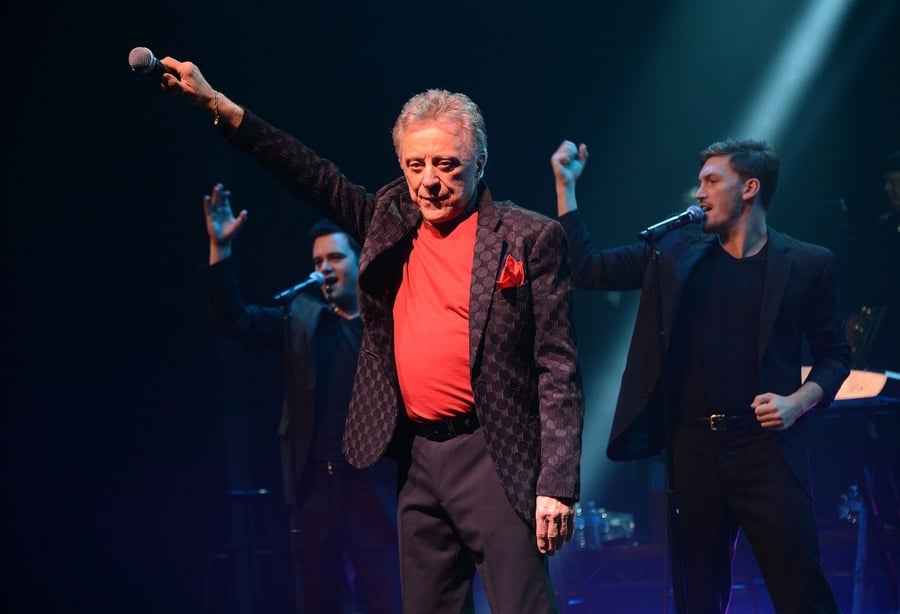 Later on, Valli established himself as a solo artist with the brassy Can't Take My Eyes Off of You, which reached #2 in 1967. His debut solo album was a gathering of various single releases and a few new recordings. The A-Side track "I Make a Fool of Myself" reached No. 10. Valli's second solo album, "Timeless," contained the top 40 hot "To Give (The Reason I Live.) Since, he has made a balance between his own music career and his work with the band. Valli ended the sixties with a string of recordings that were included in the album "Half & Half", a Valli/ Four Seasons joint effort. The only hit to emerge from this album was "The Girl I'll Never Know (Angels Never Fly This Low), which reached No. 52.

In 1966, "You're Ready Now," a Valli solo record, became part of the Northern soul scene and reached No. 11 on the UK Singles Chart. In the mid 1970s, he struck gold in the disco era with his top-charting songs like "My Eyes Adored You" (1974), and had a No. 6 Billboard hit with disco "Swearin' to God," which reached No. 31 on the UK charts. He gained further success in the UK with "Fallen Angel." While Valli was reaching No. 11 in the UK, the Four Seasons also had a hit in the UK sans Valli with "Silver Star." In 1976, he covered the Beatles' "A Day in the Life" for the musical documentary "All This and World War II." In 1978, he scored a big hit when he sang the theme song for the film version of the play "Grease". The song was written by Barry Gibb of the Bee Gees and performed by Valli. It became an instant number one hit. The following year, he saw more chart success with "Save Me, Save Me" and "Fancy Dancer." In the later part of the '70s, Valli began suffering hearing loss, forcing him to sing from memory. Most of his hearing was restored in 1980 when he had surgery performed by Los Angeles ear specialist Victor Goodhill. In 1992, the Four Seasons released a new album entitled "Hope and Glory."

His vast opus kept him in the public eye as nostalgia in the 1990s and early 2000s. Eventually, proper respect was paid to his life and accomplishments with "Jersey Boys", a wildly popular and award-winning Broadway musical in 2005. The musical was actually performed by Valli and the members of the Four Seasons, and featured a biographical narrative told as four separate points of view by each of the members of the Four Seasons. The musical has touring companies all around the world, as well as a version at Paris Las Vegas casino. This production just endorsed Valli's enduring contributions to popular music along with the singular brilliance of his unique voice. The show has been nominated for eight Tony Awards, winning four, notable for Best Musical, Actor, and Supporting Actor. In 2014, it was adapted into a film of the same name directed by Clint Eastwood.

As one of the original members of The Four Seasons (together with DeVito, Massi and Gaudio), Valli got inducted into the Rock and Roll Hall of Fame in 1990 and the Vocal Group Hall of Fame in 1999. In October 2007, Valli released an album containing covers of his favorite songs from the 1960s called "Romancing the '60s." In October 2012, Valli made his Broadway debut with a week-long concert series at the Broadway Theatre in New York. Frankie Valli and the Four Seasons toured the U.S. from March 2016 to January 2017 playing small-to-mid-size venues. Over the years, Valli has appeared as an actor in a handful of TV shows, including a stint on "The Sopranos."

Valli has been married three times, first to his wife Mary in his early twenties. They had two daughters together They divorced after 13 years together, in 1971. He then married MaryAnn Hannagan in 1974 and their marriage lasted eight years. In 1984, he married Randy Clohessy. They had three sons and separated in 2004. Tragedy has touched Valli's life–in 1980, his stepdaughter from Mary, Celia, was killed when she fell off a fire escape. Six months later, his youngest daughter Francine died from a drug overdose. In May 2012, Valli was honored with the Ellis Island Medal of Honor for his commitment to a variety of humanitarian efforts and causes.