Frankie Avalon net worth: Frankie Avalon is an American actor, singer, playwright who has a net worth of $30 million. Frankie Avalon was born Francis Thomas Avallone on September 18, 1940 in Philadelphia, Pennsylvania. Avalon is a former teen idol who is most widely known for his beach party comedy films in the mid-60s, in which he frequently teamed up with the equally popular actress/singer Annette Funicello (who died April 8, 2013). Avalon was devastated when Funicello passed away and told TMZ that she was not only his friend, but he considered her family. Avalon is the Godfather of Funicello's daughter, Gina. His career spans three generations of music, television and motion pictures. Avalon was introduced to the world of entertainment at the age of 11 when he played the trumpet on television shows like The Jackie Gleason Show. Avalon's film credits also include dramatic roles in the John Wayne film The Alamo and the science fiction story Voyage to the Bottom of the Sea alongside Barbara Eden. In 1978, Avalon's performance as Teen Angel in the movie/musical Grease (singing Beauty School Dropout), introduced him to a new generation. Between 1958 and 1977, Frankie Avalon released a total of seven albums and over forty singles, the most popular of which were Venus, Why and Just Ask Your Heart (according to U.S. chart positions). His music became one of the most defining sounds of the 'pre-Beatles' rock and roll era. Avalon married Kathryn Diebel in 1963 and they had eight children: Frankie, Jr., Carla, Joseph, Laura, Tony, Dina, Kathryn and Nicolas. 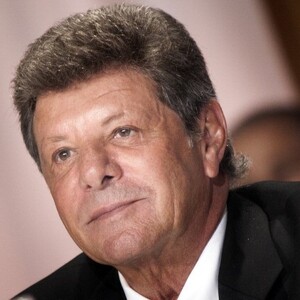