Franco De Vita net worth: Franco De Vita is a Venezuelan singer-songwriter who has a net worth of $40 million. Franco De Vita was born in Caracas, Venezuela in January 1954. He released his self-titled debut studio album in 1984 and the albums Fantasia in 1986 and Al Norte Del Sur in 1988. De Vita signed with CBS Records in 1989 and released the album Extranjero in 1990 which featured a #1 single on the US Latin charts and earned him an MTV Video Music Award. He released the albums En Vivo Marzo 16 in 1992, Voces a mi Alrededor in 1996, Nada Es Igual in 1999, and Segundas partes tambien son buenas in 2002. His album Stop in 2004 made the Top 10 on the US Latin charts as well as throughout Latin America. De Vita has also released the albums Stop + Algo Mas in 2005, Mil y Una HIstorias En Vivo in 2006, Simplemente La Verdad in 2008, En Primera Fila in 2011, Vuelve en Primera Fila in 2013, and Libre in 2016. He has had more than two dozen hits on the Billboard charts in the U.S. and also released an album in Italian and Portuguese. 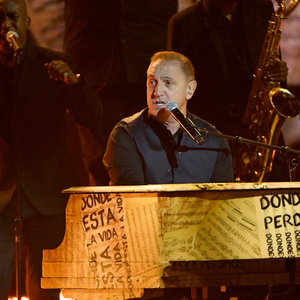