FKA Twigs net worth: FKA Twigs is a British singer, songwriter, producer, and dancer who has a net worth of $4 million. FKA Twigs was born Tahliah Debrett Barnett in Gloucestershire, England in January 1988. At 17 she moved to London where she landed work as a backup dancer while working on her own music. FKA Twigs released the extended plays EP1 in 2012 and EP2 in 2013. Ep2 reached #5 on the US Dance chart and #13 on the US Heat seekers chart. Her debut studio album LP1 was released in 2014. The album reached #16 in the UK and #30 in the US. FKA Twigs' most popular single is "Two Weeks" which reached #9 on the UK Indie charts. FKA Twigs won a YouTube Music Award in 2015 and was nominated for a Grammy Award the same year. In 2019 she released a highly-anticipated second studio album titled Magdalene. The album reached #21 on the UK Charts and #54 on the US Charts.

Personal Life: FKA Twigs dated actor/musician Robert Pattinson from 2014 to 2017. There were on again/off again and at one point may have been engaged. She dated Shia LaBeouf fro mid-2018 until May 2019 after meeting on the production of the film "Honey Boy". 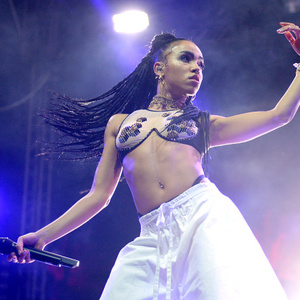