Fiona Apple net worth: Fiona Apple is an American singer and songwriter who has a net worth of $10 million. Fiona Apple is known for her hit singles "Shameika," "Fast as You Can," and "Criminal," the latter of which also attracted attention for its controversial music video. From 1997 to 2020, all of her albums reached the top 15 on the US Billboard 200. Apple has received a plethora of accolades, including multiple Grammy and MTV Video Music Awards.

Fiona Apple took the music world by storm in the mid-90s, while still in her late teens. A friend passed her three-song demo to a music publicist, who then passed it on to an executive at Sony Records. She signed with the label in 1996, and released her first album soon after. Her debut album, entitled "Tidal", was a huge success. It sold almost 3 million copies and was certified triple Platinum. The track, "Criminal", became a radio hit and earned her a Grammy for Best Female Rock Vocal Performance. Her outspoken attitude created problems with the press, however, and she canceled many of her concert dates, which earned her a reputation as being a difficult performer with which to work. She released a second album in 1999, which was critically successful, but suffered commercially, selling only 1 million copies. Her third album, released three years later, was the subject of great controversy, when it was leaked in its entirety online, after it appeared that Sony was going to shelve the project. It was eventually released and was subsequently certified Gold. Her fourth album "The Idler Wheel" was released in 2012. On April 17, 2020 Fiona released her fifth studio album, "Fetch the Bolt Cutters".

Fiona retreated from studio album production between 2012 and 2020. During this time she continued to compose music, mainly one-off singles, including the theme song for the Showtime series "The Affair" which debuted in 2014. She also continued to perform concerts somewhat regularly.

Early Life and Career Beginnings: Fiona Apple was born as Fiona Apple McAfee-Maggart in 1977 in New York City, New York. Her mother, Diane, was a singer, while her father, Brandon, was an actor; they had met while both were in the cast of the Broadway musical "Applause." Apple has a sister, Maude, and a half-brother named Garett. She and her sister were raised by their mother in Harlem's Morningside Gardens housing co-op. During the summers, she lived with her father in Los Angeles. As a child, Apple was classically trained on the piano, and by the age of eight, had begun composing her own music. At 12, a traumatic and formative event came when Apple was raped outside her Harlem apartment. She later developed an eating disorder, and attended Model Mugging courses to learn self-defense. After relocating to Los Angeles to be with her father, she attended Alexander Hamilton High School.

In 1994, Apple had her introduction to the music industry when she gave a demo tape of her songs to her friend, who happened to be the babysitter for music publicist Kathryn Schenker. Subsequently, Schenker sent the tape to Sony Music executive Andy Slater, who soon after signed Apple to a record deal.

"Tidal" and Start of Recording Career: Apple released her debut album, "Tidal," in 1996; comprised of songs she had written when she was 17, it was largely inspired by her recent breakup with her first boyfriend. The album was a huge success, selling 2.7 million copies and going three times Platinum in the US. Among its singles were "Shadowboxer," "Sleep to Dream," "Never is a Promise," and "Criminal," which hit the top 40 on the Billboard Hot 100 and garnered Apple a Grammy Award for Best Female Vocal Rock Performance. Later, in 1998, Apple covered the songs "Across the Universe" and "Please Send Me Someone to Love" for the soundtrack to the film "Pleasantville."

In 1999, Apple released her second album, "When the Pawn…," which was produced by musician Jon Brion. Although not as successful as "Tidal," the album still became certified Platinum, selling one million copies in the US. Its lead single, "Fast as You Can," made it to the top 20 on Billboard's Modern Rock Tracks chart, and also became Apple's first top 40 hit in the United Kingdom. 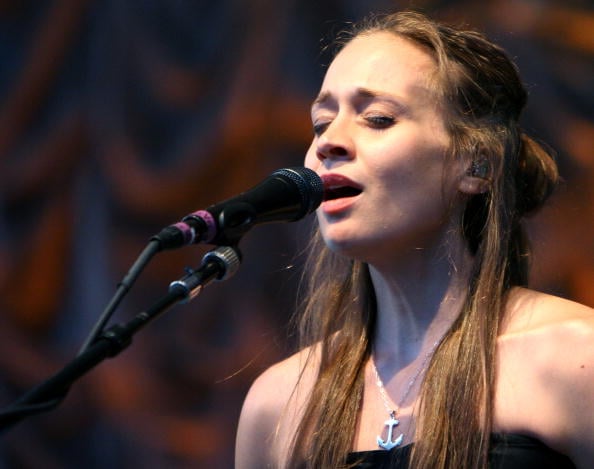 "Extraordinary Machine": After collaborating with Johnny Cash on a couple of songs in the early 2000s, Apple began recording her third album, "Extraordinary Machine," in 2002. However, unhappy with Jon Brion's production, she chose not to release the record, leading fans to protest the label on the false assumption that it was withholding the release. "Extraordinary Machine" was eventually re-produced without Brion, and released in 2005; it became certified Gold, and was nominated for a Grammy Award for Best Pop Vocal Album. In late 2005, Apple went on tour to promote the album.

"The Idler Wheel…" and "Fetch the Bolt Cutters": The year 2012 saw the much-anticipated release of Apple's fourth studio album, "The Idler Wheel…," which had been previously delayed. Receiving great critical acclaim, it was nominated for a Grammy Award for Best Alternative Music Album. Even more acclaim came in 2020, when Apple released "Fetch the Bolt Cutters." The album won two Grammy Awards: Best Alternative Music Album and Best Rock Performance for the single "Shameika."

Other Songs and Collaborations: Beyond her studio albums, Apple has done numerous collaborations for other projects. In 2014, she wrote the opening theme for the Showtime drama series "The Affair." That year, she also partnered with singer Blake Mills for a series of performances to promote his new album. In 2006, Apple appeared on comedian Zach Galifianakis' joke track "Come Over and Get It (Up in 'Dem Guts)," and recorded a cover of "Sally's Song" for the special edition release of "The Nightmare Before Christmas" soundtrack.

Apple has also collaborated with Andrew Bird, Shirley Manson, Jakob Dylan, Cristophe Deluy, Margaret Cho, and Nickel Creek, and recorded the song "Dull Tool" for the Judd Apatow comedy film "This is 40." In 2019, Apple collaborated with King Princess on a rendition of her 1999 song "I Know."

Personal Life and Philanthropy: During a photo-shoot in 1997, Apple met director Paul Thomas Anderson, with whom she began a relationship of many years. In the mid-2000s, she was seeing author and television creator Jonathan Ames.

Engaged in social activism and philanthropy, Apple performed with Jon Brion at the 2010 charity concert "Love and Haiti, Too: A Music Benefit," which raised money for those impacted by the recent Haiti earthquake. Later in 2010, Apple released the song "So Sleepy," written by children involved with 826LA, a Los Angeles nonprofit that helps students with their writing skills. In 2017, Apple released the protest song "Tiny Hands" to accompany the Women's March on Washington. A couple of years later, she pledged to donate two years' worth of her earnings to the While They Wait fund, which provides refugees with legal services and basic life resources. 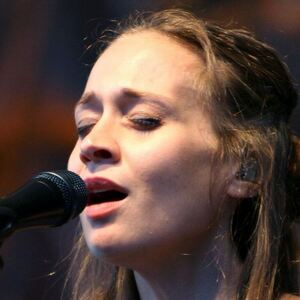