Fifth Harmony Net Worth: Fifth Harmony is an American (musical) girl group that has a net worth of $10 million. Fifth Harmony is best known as a girl group formed on Season 2 of The X Factor. The group consists of Ally Brooke Hernandez (born San Antonio TX), Normani Hamilton (born Atlanta GA), Dinah Jane Hansen (born Santa Ana CA) , Camila Cabello (born Cojimar, Cuba) and Lauren Jauregui (born Miami FL). After finishing in third place behind Tate Stevens and Carly Rose Sonenclar on the show, Fifth Harmony signed a joint deal with Syco Music, owned by judge and music executive Simon Cowell, and Epic Records, L.A. Reid's record label. Following the X Factor Season 2 finale on January 14, 2013, Fifth Harmony was voted the "Next Pop Superstar of 2013" by Popdust Magazine. Fifth Harmony was also featured on Boyce Avenue's 2013 EP "Cover Collaborations, Volume 2", singing covers of Mirrors by Justin Timberlake and When I Was Your Man by Bruno Mars. Their debut EP, Better Together was released on October 22, 2013 and debuted at No. 6 on the Billboard 200 and No. 2 on iTunes album charts. They went on to open for Demi Lovato and appear on numerous radio and television shows. Fifth Harmony cites Demi Lovato, Katy Perry, Whitney Houston, Spice Girls and Destiny's Child as their main influences, as well as Beyoncé, Alicia Keys, Christina Aguilera, Selena Quintanilla, Celia Cruz, Alejandro Fernandez, Lana Del Rey, Leona Lewis and the bands Journey, Paramore and The Script as other sources of musical inspiration. They have described their music as having a "retro feel". Each member has a different voice type: Lauren has a mature, smoky voice, which brings a fierce and "feisty flavor"; Camila has a unique voice that gives the group a "raw edge"; Normani has a bluesy vocal style that comes from her roots as a gospel singer; Ally has a "powerful" vocal range which has vibrant energy; Dinah's vocal style has drawn comparisons to Beyoncé and Alicia Keys. 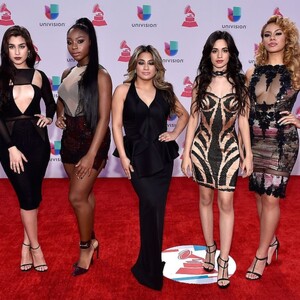