Fela Kuti net worth: Fela Kuti was a Nigerian musician, composer, and human rights activist who had a net worth of $5 million at the time of his death. That net worth includes the value of his his intellectual property including his likeness, name, trademarks and music catalog, which increased in value exponentially after his death.

Fela Kuti was born in Abeokuta, Colony of Nigeria in October 1938 and passed away in August 1997. He was considered a pioneer in the music genre of Afrobeat. Kuti was known as one of Africa's most charismatic and challenging musical artists. He played saxophone, keyboards, trumpet, guitar, and drums in addition to singing. Fela Kuti released the albums Fela Fela Fela in 1969, Fela's London Scene in 1971, Why Black Man Dey Suffer in 1971, Live! in 1971, Open & Close in 1971, Shakara in 1972, Roforofo Fight in 1972, Afrodisiac in 1973, Gentleman in 1973, Confusion in 1975, Expensive Shit in 1975, He Miss Road in 1975, Zombie in 1976, Stalemate in 1977, No Agreement in 1977, Sorrow Tears and Blood in 1977, Shuffering and Shmiling in 1978, Black President in 1981, Original Sufferhead in 1981, Unknown Soldier in 1981, Army Arrangement in 1985, Beasts of No Nation in 1989, and Confusion Break Bones in 1990. During his life he clashed many times with the Nigerian government and was jailed on several occasions, sometimes for longer than a year. When he died in 1997, Fela did not leave a will or any formal indication for how he wanted his assets distributed. His estate recognized seven children, of which one was deceased. During his lifetime he reportedly had more than 20 wives/partners, none of whom were given any right to his assets. More than one million people reportedly attended his funeral. 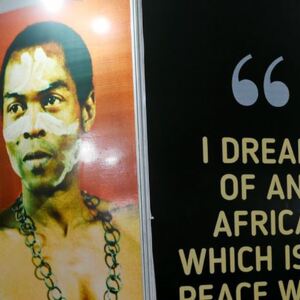