How much is Fats Domino Worth?

Fats Domino net worth: Fats Domino was an American musician who had a net worth of $8 million dollars. He was born Antoine Domino Jr. in February 1928 in New Orleans, Louisiana, where he was also raised. It was here that he began playing musical instruments after watching his father and uncle play. Domino began receiving widespread notoriety when he released his first record "The Fat Man" in 1950. It was a production of Imperial Records. During this time, and in subsequent releases thereafter, he became famous for hosting a strong back beat and his "wah-wah" vocalizations. Domino plays various instruments, but is best known for his work on the piano, as well as singing and writing multiple songs. To date, he has had 35 songs to reach the top 40 on American charts. He also had five gold records (meaning they sold at least a million copies) before the year 1955. Though Domino's music career has slowed down, he still actively plays and releases music. During Hurricane Katrina, it was widely thought that he had perished in the storm. Domino and his family chose to stay at home – which he said was due to his wife, Rosemary's poor health. The area is said to have flooded heavily, after which his home was graffiti-ed with "RIP" among other various messages. However, it was later announced that he had survived the storm and would continue performing. Fats Domino died on October 25, 2017 at the age of 89. 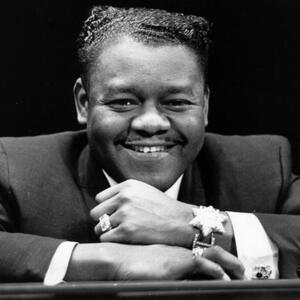