Ester Dean net worth: Ester Dean is an American songwriter, singer, rapper and record producer who has a net worth of $24 million. She is best known for her single, "Drop It Low" which features Chris Brown. She is also known for co-writing songs with dozens of artists, including Christina Aguilera, Katy Perry, Keri Hilson, Beyoncé, Priyanka Chopra, Mary J.

Blige, Nicki Minaj, Kelly Clarkson, Ciara, The Pussycat Dolls, Usher, Kelly Rowland, Girlicious, Rihanna, R. Kelly, Britney Spears, Melody Thornton, Vanessa White, Selena Gomez, Soulja Boy Tell 'Em, Pia Toscano, Tinie Tempah, Lil Wayne, and Machine Gun Kelly. In 2011, Dean contributed to the soundtrack for the animated film, Rio by Blue Sky Studios. In 2012, she voiced two of the characters in the fourth film in the Ice Age franchise, called Ice Age: Continental Drift, and she made her acting debut in the film Pitch Perfect; she also performs on the soundtrack. She was born in 1986 in Muskogee, Oklahoma but lived in Tulsa throughout most of her childhood until moving to Omaha, Nebraska as a teenager. Upon graduating from high school she moved to Atlanta and eventually relocated to Los Angeles where she became a successful songwriter. During her career, she has been nominated for a Grammy Award five times, BET Award for Best Female Hip-Hop Artist, and has won MTV Movie Award for Best Musical Moment. Dean has said at times, she picks fights with her boyfriends in order to be inspired for songwriting. In addition to her songwriting and musical abilities, Dean also developed a sex toy called Rude Boy, which was named after her first #1 song. 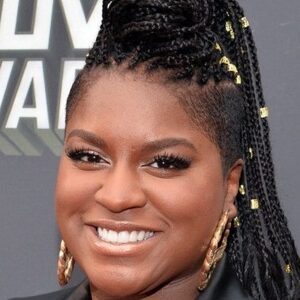