Esmee Denters net worth: Esmee Denters is a Dutch singer-songwriter who has a net worth of $4 million dollars. Esmee Denters was born in Amhem, Netherlands in September 1988. She attended the HAN University of Applied Sciences but dropped out to join Tennman Records in 2007. In 2006 she created a YouTube page and uploaded videos of her singing mostly cover songs.

She signed with Justin Timberlake's record label. In 2009 Denters released her debut studio album Outta Here. The album was produced by Justin Timberlake and made it to #5 on the Netherlands charts. In 2009 she went on tour with Honor Society. Her album contained the singles "Outta Here", "Admit It", and "Love Dealer" which featured Timberlake. In 2012 Denters announced she was no longer signed with Tennman or Interscope Records, but is working on her new album on her own. She announced her second album would be titled Screaming Out Loud. In 2012 her song "It's Summer (Because We Say So)" was released in a music video by 17 Cosmetics. She signed with Kira Plastinina in 2006 and appeared in commercials and advertisements for the Russian designer. In 2009 she signed a deal with Wacoal as the face for B. Tempt'd. She has won a MTV Europe Music Award, three TMF Awards, and an EBBA Award. She has also toured with Timberlake and Enrique Iglesias. 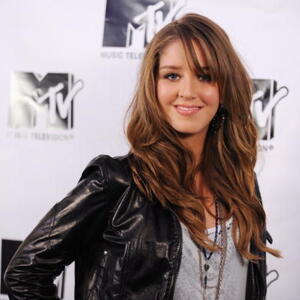